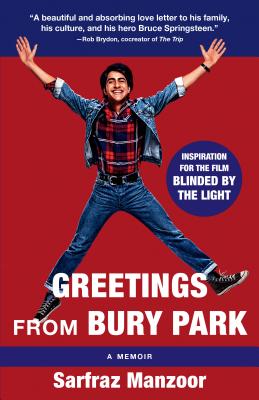 By Sarfraz Manzoor
$16.00
In stock at Brooklyn or Jersey City -- click for more details

NOW A MAJOR MOTION PICTURE. A charming memoir about the impact of Bruce Springsteen's music on a Pakistani boy growing up in 1970s Britain.

Sarfraz Manzoor was two years old when, in 1974, he emigrated from Pakistan to Britain with his mother, brother, and sister. He spent his teenage years in a constant battle, trying to reconcile being both British and Muslim, trying to fit in at school and at home. But when his best friend introduced him to the music of Bruce Springsteen at age sixteen, his life changed completely. From the moment Manzoor heard the opening lines to "The River," Springsteen became his personal muse, a lens through which he was able to view the rest of his life. Both a tribute to The Boss and a story of personal discovery, Blinded by the Light (originally published as Greetings from Bury Park) is a warm, irreverent, and exceptionally perceptive memoir about how music transcends religion and race. Featuring a new afterword by the author.

SARFRAZ MANZOOR is a writer, broadcaster, and documentary maker. He has written and presented documentaries for the BBC and, prior to his broadcasting career, was a deputy commissioning editor at Channel 4, and before that spent 5 years as producer and reporter on Channel 4 News. His written work has appeared in publications as diverse as the Guardian, Daily Mail, Marie Claire, the Independent, the Observer,Uncut, the Spectator, Prospect, and New Statesman.

"Charming and affectionate. . . . [The novel] rises above the predictable coming-of-age genre on the strength of Manzoor's unflinching honesty and his unique world view. . . . You don't have to be a Springsteen fan to enjoy this book or understand Manzoor's devotion. You just have to recall a time when you were still open enough that music had the power to shatter the world view you inherited." —The Miami Herald

"[Blinded by the Light] vibrantly displays a modest and unpretentious sense of optimism, and offers the hope that by connecting with our own choices in music we can transcend cultural and generational differences to reach personal freedom without denying our need to belong." —The Guardian

"A clever memoir from an unlikely fan of Bruce Springsteen." —The New York Post

“Quirky. . . . Brilliant. . . . Offers an interesting insight into the psyche of an avid fan.” —The Independent

“Successfully evokes not only a particular time and place, but, more importantly, a pervasive sense of marginality. . . . A very personal narrative of love, separation, loss and guilt.” —New Statesman