We Were Promised Flying Cars: 100 Haiku from the Future (Hardcover) 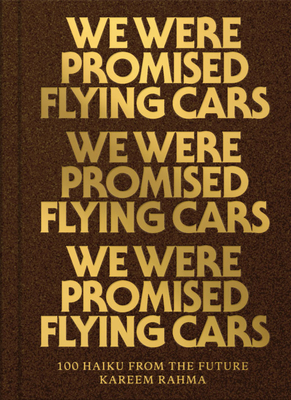 The debut poetry collection from Arab-American poet Kareem Rahma-formerly of VICE and The New York Times-shows us the future in haiku.

What awaits us is not the future we had hoped for or what we were promised, but the terrible consequences of we've done to ourselves.

Managing to be both a hopeful prayer for change and direct warning to the reader, New York-based author Kareem Rahma makes masterful work of the haiku form to build a very possible future world dominated by corporations, an earth depleted of natural resources and humans turned into zombies, glued to their screens. Elegant but caustically humorous, even in the darkness, Rahma remains hopeful that we can still keep the promises we made in the past. Paired with Jean-Marc C t 's 19th-century illustrations of an imagined year 2000, We Were Promised Flying Cars is not just for poetry and science fiction fans, but anyone interested in what tomorrow might look like.