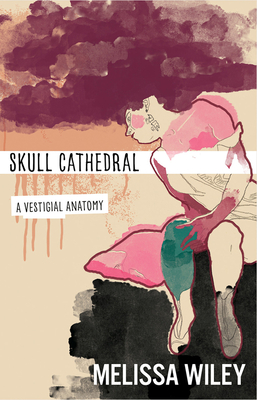 By Melissa Wiley
$17.95
Available from our distributor; usually Ships in 1-5 Days

In Skull Cathedral, Melissa Wiley pulls stories from the vestigial remnants of the creatures we were or could have become. The appendix, pinky toes, tonsils, male nipples, wisdom teeth, and coccyx are starting points through which Wiley explores exaltation, eroticism, grief, and desire. Using the slow evolution and odd disintegration of vestigial organs to enter the braided stories of the lives we establish for ourselves, the people we grieve, and the mysteries of youth, memory, and longing, Wiley’s lens is deeply feminist and compassionate.

Turning to these mysterious anatomical remnants, she finds insight into the lingering questions of loss and the nagging sensations of being incomplete. For instance, in considering the appendix, Wiley finds herself working through her grief after the loss of her father, a sensation that again resurfaces in the face of the moon as she looks to the sky. Testing the boundaries of genre and fighting to expand the limits of perception, the stylized essays of Skull Cathedral embrace the strangeness of life through the lingering peculiarities of the human body. Skull Cathedral, Wiley’s second book of nonfiction, won the 2019 Autumn House Nonfiction Prize.

Melissa Wiley grew up on a small farm in Indiana and currently works as a freelance writer and editor in Chicago. She is the author of Antlers in Space and Other Common Phenomena, and her work has appeared in literary magazines including the American Literary Review, Terrain.org, The Rumpus, Entropy, DIAGRAM, Phoebe, Waxwing, the Offing, Vol. 1 Brooklyn, and PANK.

“Hungry, ascetic, erotic, and haunted, Skull Cathedral moves from essay to essay as if from one dream to the next, testing what it means to be attached to a body, to beauty, to love. There isn’t a sentence here that isn’t in awe of consciousness and the cold, clear ache of being alive. Wiley is a writer who takes no moment for granted, and maybe that's why perception here is so intensified, from a strand of hair in an infant’s hand to a stranger's lipstick left behind on a coffee cup. This is life on the brink, confronting the inescapable fact that all of us die and everything goes. It’s also a joy to read, rigorous and brilliant, so fresh.”
— Paul Lisicky, author of "Later: My Life at the Edge of the World"

“Skull Cathedral is a lovely summoning to another world, one in which the body is lifted into pure essayistic fury, a stormy, haunted thought-scape that strives to reach and clutch and keep close the inevitable losses of a life. These memoiristic essays zoom in and out, showcasing what we have lost, what we have yet to lose. Wiley offers us the moon and its brilliance and its depressions, but more importantly, she telegraphs its distance, longing, and unknowing.”
— Jenny Boully, author of "The Body"