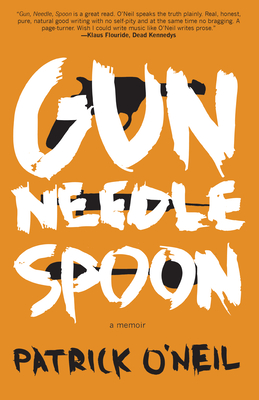 This memoir follows a punk rock pioneer on his slide into drug abuse and life as an armed robber, all the way through life in recovery and what it's like to look back on those times, knowing all the while that he is still under the threat of three strikes, a twenty-five-to-life prison sentence waiting. He has no choice but to deal with it all drug free.

During punk rock's heyday, Patrick O'Neil worked at the San Francisco's legendary Mabuhay Gardens. He went on to become the road manager for Dead Kennedys and Flipper, as well as T.S.O.L. and the Subhumans. He holds an MFA from Antioch University Los Angeles.

Patrick O'Neil is the author of the memoir "Hold Up," which was published in France. During punk rock's heyday (1979-83) O'Neil worked at the legendary Mabuhay Gardens, San Francisco's premier punk venue. He then went on to become a roadie and eventually the road manager for Dead Kennedys and Flipper, as well as the Subhumans (UK) and T.S.O.L. (Los Angeles). But that was before his life got totally out of control. O'Neil was a heroin addict for eighteen years, incarcerated for two and a half years, went to two long term residential rehabs for a total of three years, worked as a substance abuse counselor for six years, and has been clean off drugs for the last thirteen. He holds an MFA from Antioch University Los Angeles, teaches at a community college, and splits his time between Los Angeles and San Francisco.