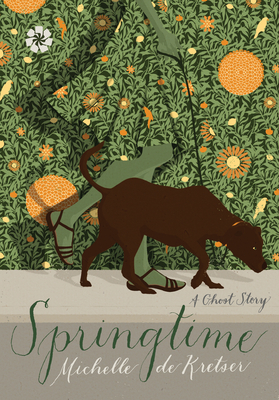 By Michelle de Kretser
$11.95
Available from our distributor; usually Ships in 1-5 Days

When Frances met Charlie at a party in Melbourne, he was married with a young son. Now that the couple has moved to subtropical Sydney, a lusher and more chaotic city, Frances has an unshakable sense that the world has tipped on its axis. Everything seems alien, and exotic--and Frances is haunted by the unknowability of Charlie's previous life. A young art historian studying the objects in paintings--the material world--Frances takes mind-clearing walks around her neighborhood with her dog. Behind the fence of one garden, she thinks she sees a woman in an old-fashioned gown, but something is not right. It's as if the garden exists in a vacuum suspended in time, "at an angle to life." Springtime is a ghost story that doesn't conform to the genre's traditions of dark and stormy nights, graveyards and ruins. It breaks new ground by unfolding in sunny, suburban Australia, and the realism of the characters and events make the story's ambiguities and eeriness all the more disquieting. The richness of observation here is immediately recognizable as Michelle de Kretser's, a writer who has been praised by Hilary Mantel as a master of "the sharp, almost hallucinatory detail."

Michelle de Kretser was born in Sri Lanka and emigrated to Australia when she was fourteen. Educated in Melbourne and Paris, she is the author of four novels, including the Miles Franklin Award-winning Questions of Travel and the Man Booker Prize longlisted The Lost Dog. She is currently an associate of the English Department at the University of Sydney.