One Man, One Murder: A Kayankaya Thriller (3) (Paperback) 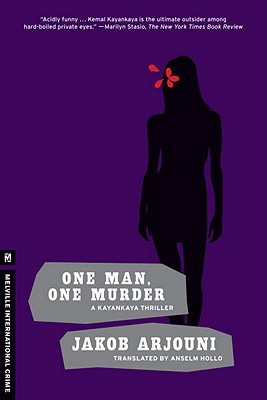 By Jakob Arjouni, Anselm Hollo (Translated by)
This item is currently unavailable and can not be ordered.
Unavailable

To rescue a kidnapped prostitute, Kemal Kayankaya must face some of Germany’s most depraved and dangerous criminals. Fortunately, some of them are his friends...

Love is never easy—especially when your girlfriend is an illegal Thai prostitute who has been kidnapped (again) by a gang of sex traffickers. Fortunately for the hapless fiancé, wisecracking gumshoe Kemal Kayankaya is on the case. The son of a Turkish garbage collector, he knows a thing or two about living in the ethnic fringes of the ugliest German city of them all: Frankfurt.

Kayankaya plunges into the city’s underbelly, where the police don’t care if you live or die, and the powerful view an illegal alien as just another paycheck. One Man, One Murder populates its pages with unforgettable characters, whip-smart dialogue, and a connoisseur’s collection of grim details. But it is Arjouni’s dead-on description of contemporary Europe’s racial politics, vacuous nationalism, and so- cial injustice that make his novels rise above the rest.

JAKOB ARJOUNI was born in Frankfurt, Germany in 1964, the son of acclaimed German playwright Hans Gunter Michelson. He wrote numerous books, including the novels Chez Max and Magic Hoffmann, which was shortlisted for the IMPAC Award. But it is for his series of five mysteries featuring the Turkish immigrant detective Kemal Kayankaya for which he became best known. Bestsellers throughout Europe and the winner of the German Thriller Prize, they have also been turend into wildly popular movies in his home country. Arjouni died from pancreatic cancer at age forty-eight in January 2013.

Anselm Hollo is the author of more than thirty books, most recently the essay collection Caws & Causeries and Notes on the Possibilities and Attractions of Existence: New and Selected Poems 1965-2000, which received the San Francisco Poetry Center's Book Award for 2001. His translation of Pentii Saarikoski's Trilogy received the 2004 Harold Morton Landon Translation Award from the Academy of American Poets.

Praise for One Man, One Murder

“The book is as hard-boiled as private eye stories come.” —The Toronto Star

“As winning a noirish gumshoe as has swooped onto the mystery scene in some time.” —Richard Lipez, The Washington Post

“In the emphasis on action and quck-jab dialogue, readers will notice an echo of James M. Cain and Raymond Chandler, but Arjouni’s stories also brim with the absurd humor that made The Sopranos so entertaining.” —Vikas Turakhia, The Plain Dealer (Cleveland)

“Jakob Arjouni’s downbeat detective Kemel Kayankaya has proved as enigmatic as Columbo, as erudite as Marlowe and occasionally, as crazed as Hammett’s Continental Op . . . Arjouni forges both a gripping caper and a haunting indictment of the madness of nationalism, illuminated by brilliant use of language: magnificent.” —The Guardian

“This lively, gripping book sets a high standard for the crime novel as the best of modern literature.” —The Independent

“With its snappy dialogue and rumpled heroes, Arjouni’s crime fiction owes an obvious debt to American noir but it is equally reminiscent of many Eastern European satirical novels.  The plot of Kismet may recall any number of gangster romps, but the society so caustically depicted here is as recognizable as that conjured up, for instance, by Jaroslav Hasek in The Good Soldier Schweik.” —Anna Mudow, The Barnes & Noble Review

“Re-imagines the dull capital of the German financial industry as an urban hell where minority groups and crime bosses prey on one another with ruthless abandon.” —The Daily Beast

“If you like your investigators tough and sassy, Kayankaya is your guide.” —The Sunday Times (London)

“This is true hardboiled detective fiction, realistic, violent and occasionally funny, with a hero who lives up to the best traditions of the genre.” —The Daily Telegraph

“A worthy grandson of Marlowe and Spade.” —Der Stern (Germany)

“A genuine storyteller who beguiles his readers without the need of tricks.” —L’Unità (Italy)

“Arjouni is a master of authentic background descriptions and an original story teller.” —SonntagsZeitung (Germany)

“Arjouni tells real-life stories, and they virtually never have a happy ending. He tells them so well, with such flexible dialogue and cleverly maintained tension, that it is impossible to put his books down.” —El País (Spain)

“His virtuosity, humor and feeling for tension are a ray of hope in literature on the other side of the Rhine.” —Actuel (France)