Now and at the Hour of Our Death (Paperback) 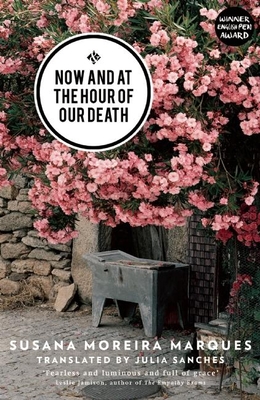 A nurse sleeps at the bedside of his dying patients; a wife deceives her husband by never telling him he has cancer; a bedridden man has to be hidden from his demented and amorous eighty-year-old wife. In her poignant and genre-busting debut, Susana Moreira Marques confronts us with our own mortality and inspires us to think about what is important.

Accompanying a palliative care team, Moreira Marques travels to Tras-os-Montes, a forgotten corner of northern Portugal, a rural area abandoned by the young. Crossing great distances where eagles circle over the roads, she visits villages where rural ways of life are disappearing. She listens to families facing death and gives us their stories in their words as well as through her own meditations.

Brilliantly blending the immediacy of oral history with the sensibility of philosophical reportage, Moreira Marques's book speaks about death in a fresh way.

Susana Moreira Marques is a writer and journalist. She was born in Oporto in 1976 and now lives in Lisbon, where she writes for Publico and Jornal de Negocios. Between 2005 and 2010 Moreira Marques lived in London, working at the BBC World Service while also a correspondent for Portuguese newspaper Publico. Her journalism has won several prizes, including the Premio AMI--Jornalismo Contra a Indiferenca and the 2012 UNESCO 'Human Rights and Integration' Journalism Award (Portugal). Now and at the Hour of our Death is her first book. Brazilian by birth, Julia Sanches has lived in the United States, Mexico, Switzerland, Scotland, and Catalonia. She obtained her undergraduate degree in Philosophy and English Literature from the University of Edinburgh and has a masters in Comparative Literature and Literary Translation from Universitat Pompeu Fabra. Her translations have appeared in Suelta, The Washington Review, Asymptote, Two Lines, and Revista Machado, amongst others. She currently lives in New York City.