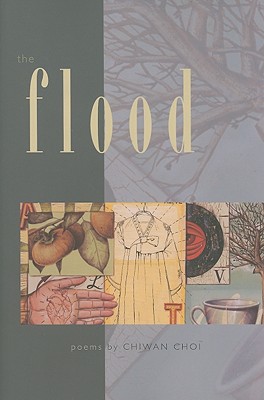 “When I first started working on ‘The Flood,’ the title piece from this collection of poems, I thought it was about the World, about Politics, about Race, about all the things that begin with capital letters that make up Life. And in 2005 when Hurricane Katrina came and left such destruction, opening up old social wounds and sins in the process, I thought this was my chance to be big, to be grand, to tackle the important subjects that important artists are seemingly never afraid of. I was going to make my

With this statement, Chiwan Cho begins to describe the impulses behind this most promising and powerful collection of poetry. His voice gives his poems a deep level of intimacy, while his economy of language distinguishes his work as authentic and accessible.

This collection is a journey to discover the poet, Chiwan, as a man, as a Korean, as a son, as a husband, as a writer. He embraces the smallest moments in his life—finding key details, examining them, breaking them down and rebuilding them, to see if, somewhere in the smallest fragments, both trivial and tragic, the poet can discover himself, reflected, resonating with his father teaching him how to survive.

Chiwan says that in the process of writing the poems in “The Flood,” he often repeated to myself Ezra Pound’s Canto 117, the line “That I have lost my center/fighting the world.” By the time Chiwan polished each line in each poem, he’d found that center again, even if it was for a fleeting

“Over eight years after I wrote the first words of this poem I thought I’d never finish, I found what I had lost. My core. My heart,” Chiwan says. “It was never about wars and tyrants and poverty nor about any of the Isms that want to suffocate us each and every day. I realized how far off the track I’d gone without realizing it.”

Born in Seoul, Korea, Chiwan Choi started elementary school in Asunción, Paraguay, and by 1980 settled in Los Angeles. Chiwan has published poems, short stories, and essays in ONTHEBUS, Esquire, and The Nervous Breakdown. He is a regularly featured writer in the Los Angeles literary circuit, frequently invited to read at venues such as The Hotel Cafe and Beyond Baroque. Chiwan received an MFA in Dramatic Writing from NYU. He currently resides in downtown Los Angeles, writing and running a small literary press, Writ Large Press, with his wife Judeth Oden.