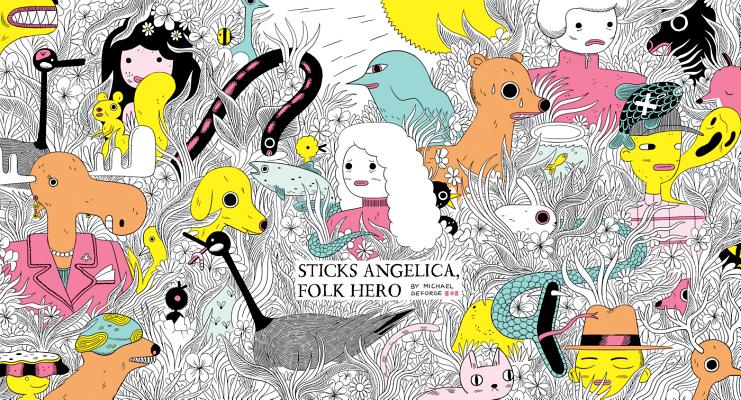 By Michael DeForge
$21.95
Available from our distributor; usually Ships in 1-5 Days

Sticks Angelica is, in her own words, “49 years old. Former: Olympian, poet, scholar, sculptor, minister, activist, Governor General, entrepreneur, line cook, headmistress, Mountie, columnist, libertarian, cellist.” After a high-profile family scandal, Sticks escapes to the woods to live in what would be relative isolation were it not for the many animals that surround and inevitably annoy her. Sticks is an arrogant self-obsessed force who wills herself on the flora and fauna. There is a rabbit named Oatmeal who harbors an unrequited love for her, a pair of kissing geese, a cross-dressing moose absurdly named Lisa Hanawalt. When a reporter named, ahem, Michael DeForge shows up to interview Sticks for his biography on her, she quickly slugs him and buries him up to his neck, immobilizing him. Instead, Sticks narrates her way through the forest, recalling formative incidents from her storied past in what becomes a strange sort of autobiography.

Deforge’s witty dialogue and deadpan narration create a bizarre, yet eerily familiar world. Sticks Angelica, Folk Hero plays with autobiography, biography, and hagiography to look at how we build our own sense of self and how others carry on the roles we create for them in our own personal dramas.

Michael DeForge was born in 1987 and grew up in Ottawa, Ontario. His one-person anthology series Lose has received great critical and commercial success, having been nominated for, or won, every major comics award including the Ignatz and Eisner awards. His illustrations have been published in The New York Times and Bloomberg View; his comics have appeared in the Believer, Maisonneuve, and the Adventure Time comic book series.