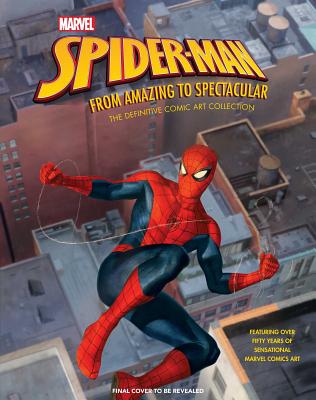 By Matt Singer, J. M. DeMatteis (Foreword by)
$45.00
Available from our distributor; usually Ships in 1-5 Days

Explore over fifty years of Spider-Man with this deluxe art book, featuring exclusive interviews and content from the incredibly talented people who brought this amazing hero to life.

Since he first appeared in the pages of Amazing Fantasy #15 in 1962, Marvel’s number one web-slinger has been swinging into the hearts of super hero fans everywhere. Originally portrayed as the chronic underdog, Spider-Man has grown from amazing to spectacular to ultimate and beyond, dominating the comics sphere and consistently ranking among the most popular super heroes of all time. With the proportionate strength of a spider, a genius mind, and a fully loaded arsenal of quips, it’s no wonder why Spider-Man is the best arachnid around.

Marvel’s Spider-Man: From Amazing to Spectacular celebrates the incredibly rich and expansive history of this iconic character in a brand new and unparalleled way—showcasing the jaw-dropping art of the Spider-Man comics and diving deep into the remarkable stories that have shaped Spider-Man into the super hero he is today. Featuring the best of Spider-Man comic art and exclusive interviews from leading Spider-Man creators like Brian Michael Bendis, Gerry Conway, Tom DeFalco, J.M. Dematteis, David Michelinie, Mark Millar, Alex Ross, Dan Slott, J. Michael Straczynski, Roger Stern, and many more, this spectacular compendium truly captures the great power and great responsibility of developing one of the most monumental heroes in comics history.

Matt Singer is a Webby Award-winning writer, critic, and podcaster. The current editor-in-chief of ScreenCrush, Matt has been a frequent contributor to the television shows CBS This Morning Saturday and Ebert Presents At the Movies, and his writing has also appeared in print and online at The Village Voice, The Dissolve, and Indiewire. He lives in Brooklyn with his wife and two daughters. His parents swear his first word as a baby was “Spider-Man.”

"Pretty much every word written by ScreenCrush editor Matt Singer is memorable. He was the perfect choice to write Spider-Man: From Amazing to Spectacular, a romp through more than 50 years of Spidey comics."
— The Film Stage