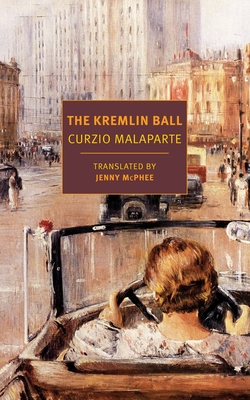 A perverse and delicious tell-all view of the Soviet elite in the 1920s.

Perhaps only the impeccably perverse imagination of Curzio Malaparte could have conceived of The Kremlin Ball, which might be described as Proust in the corridors of Soviet power. Malaparte began this impertinent portrait of Russia's Marxist aristocracy while he was working on The Skin, his story of American-occupied Naples, and after publishing Kaputt, his depiction of Europe in the hands of the Axis, thinking of this book as a another "picture of the truth" and a third panel in a great composition depicting the decadence of twentieth-century Europe. The book is set at the end of the 1920s, when the great terror may have been nothing more than a twinkle in Stalin's eye, but when the revolution was accompanied by a growing sense of doom. In Malaparte's vision it is from his nightly opera box, rather than the Kremlin, that Stalin surveys Soviet high society, its scandals and amours and intrigues among beauties and bureaucrats, including legendary ballerina Marina Semyonova and Olga Kameneva, sister of the exiled Trotsky, who though a powerful politician is so consumed by dread that everywhere she goes she gives off a smell of rotting meat. Unfinished at the time of Malaparte's death, this extraordinary court chronicle of Communist life (for which Malaparte also contemplated the title God is a Killer) was only published posthumously in Italy over fifty years after Malaparte's death and appears in English now for the first time ever.

Curzio Malaparte (pseudonym of Kurt Erich Suckert, 1898–1957) was born in Prato, Italy, and served in World War I. An early supporter of the Italian fascist movement and a prolific journalist, Malaparte soon established himself as an outspoken public figure. In 1931 he incurred ­Mussolini’s displeasure by publishing a how-to manual entitled Coup d’État: The Technique of Revolution, which led to his arrest and a brief term in prison. During World War II Malaparte worked as a correspondent, for much of the time on the eastern front, and this experience provided the basis for his two most famous books, Kaputt (1944) and The Skin (1949). His political sympathies veered to the left after the war. He continued to write, while also involving himself in the theater and the cinema.

Jenny McPhee is a translator and the author of the novels The Center of Things, No Ordinary Matter, and A Man of No Moon. She translated Natalia Ginzburg's Family Lexicon from the Italian for NYRB Classics. McPhee is the director of the Center of Applied Liberal Arts at New York University and lives in New York.

"Malaparte may just be the original postmodernist, at least as far as genre-crossing is concerned…A head-swirling kaleidoscope that, though fictional, is never for a moment fictitious.” —Kirkus Review

“Malaparte enlarged the art of fiction in more perverse, inventive, and darkly liberating ways than one would imagine possible, long before novelists like Philip Roth, Robert Coover, and E. L. Doctorow began using their own and other people’s histories as Play-Doh.” —Gary Indiana

“A scrupulous reporter? Probably not. One of the most remarkable writers of the 20twentieth century? Certainly.” —Ian Buruma