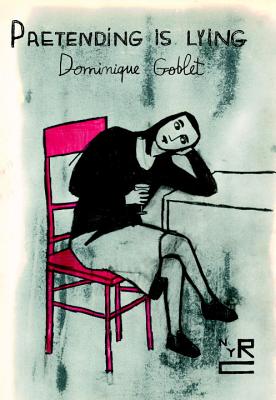 By Dominique Goblet, Sophie Yanow (Translated by)
$24.95
Available from our distributor; usually Ships in 1-5 Days

The first book to appear in English by the acclaimed Belgian artist Dominique Goblet, Pretending is Lying is a memoir unlike any other.

WINNER OF THE 2018 SCOTT MONCRIEFF PRIZE FOR TRANSLATION FROM FRENCH

In a series of dazzling fragments—skipping through time, and from raw, slashing color to delicate black and white—Goblet examines the most important relationships in her life: with her partner, Guy Marc; with her daughter, Nikita; and with her parents.

The result is an unnerving comedy of paternal dysfunction, an achingly ambivalent love story (with asides on Thomas Pynchon and the Beach Boys), and a searing account of childhood trauma—a dizzying, unforgettable view of a life in progress and a tour de force of the art of comics.

This NYRC edition is a hardcover with extra-thick paper, full color throughout, and features new English hand-lettering by the artist.

Dominique Goblet was born in 1967 in Brussels, Belgium, and studied illustration at St. Luke’s Institute. Known for her wide range of artistic mediums and eclectic style of visual storytelling, she was an early contributor to the comics publisher Fréon’s anthology Frigorevue. Involved from the start in the creation of the experimental comics publisher Frémok, she published several books with them: Portraits crachés (1997), Souvenir d’une journée parfaite (2002), and Les hommes-loups (2010). At the same time she worked with the Parisian publishing house L’Association and published two books with them: Pretending Is Lying (2007) and Chronographie (2010), a book of double portraits of her and her daughter made once a week for ten years; both received a number of nominations and prizes, including the EESI award at the Angoulème festival and the Prix Töpffer. Most recently she has published Plus si entente (Actes Sud BD/Frémok), a collaboration with the Berlin artist Kai Pfeiffer. Artist, comics author, and professor of comics and illustration, she is also certified as an electrician, plumber, and welder.

Sophie Yanow is a cartoonist and translator. She is the author of War of Streets and Houses and was a fellow at the Center for Cartoon Studies in White River Junction, Vermont.

"Here's a terrific example of the current wave of great comics from Europe. Dominique Goblet's approach is postmodern, with a scruffy, anything-goes mix of styles and moods, but it's marked everywhere by her forays into photography. She intersperses her tale – an autobiographical account of family, a lover, truth, lies and brutality – with images that look like photos." —Etelka Lehoczky, NPR Book Concierge, "2017's Great Reads"

“It is a rare gift to come across a book as tender, affecting and complete as Pretending is Lying.”  — Sheila Heti, The New York Times Book Review

"Primarily pencil-sketched, Goblet’s art is unbridled and alternately busy and peaceful. She uses lettering to great effect, too, expressing mood, feeling, and, in her father’s case, drunkenness with the appearance of the text. Some pages feature only vague, dimly lit shapes, as if there are ghosts hovering on the periphery of Goblet’s relationships, her memoir’s primary subject. This is an imaginative, nonlinear rendering of an artist’s life so far.” —Booklist

"A touchstone work of comics autobiography, from one of the genre’s key innovators, is finally translated, complete with expressive lettering newly handcrafted by the artist.”  —Sean Rogers, Globe and Mail

"Pretending Is Lying is a perceptive and poignant contribution to the fields of both experimental comics and graphic autobiography, and well worth the read.” — Hans Rollman,  Pop Matters

"Combining paint, ink, charcoal, and pencil, Goblet's mixed-media pages feel wet, textured, bleeding…. [Pretending is Lying is] part of a rich tradition of international graphic memoirs from Art Spiegelman’s Maus to Marjane Satrapi’s Persepolis to Riad Sattouf’s The Arab of the Future...We're invited to peer into the artist's mind.... It is a privilege to serve as [her] confidante, if only for a while…" — Chantal McStay,  BOMB

“Dominique Goblet spent twelve years putting parts of her life to rest—explicit snippets and fragments that condense her entire childhood and sketch a tender portrait of the adult she is today...Goblet hides nothing. And she forgives, weaving together, in gray and black and on yellowing paper, with strokes of her brush, a shocking kind of autobiography.” —L’Express

“One of the most beautiful and successful books to be published by L’Association.” —du9

“Faire semblant c’est mentir raises interesting and upsetting questions about our relationships with our loved ones and the way in which we build those relationships.” —Actua BD