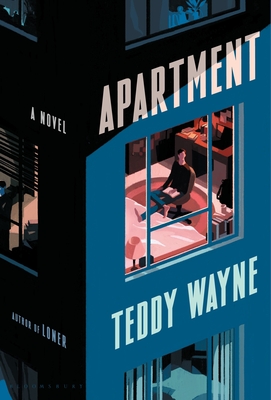 Named A Most-Anticipated Book by The New York Times, Vogue, The Boston Globe, Salon,
The Millions, Inside Hook, and Vol. 1 Brooklyn

In 1996, the unnamed narrator of Teddy Wayne’s Apartment is attending the MFA writing program at Columbia on his father’s dime and living in an illegal sublet of a rent-stabilized apartment. Feeling guilty about his good fortune, he offers his spare bedroom--rent-free--to Billy, a talented, charismatic classmate from the Midwest eking out a hand-to-mouth existence in Manhattan.

The narrator’s rapport with Billy develops into the friendship he’s never had due to a lifetime of holding people at arm’s length, hovering at the periphery, feeling “fundamentally defective.” But their living arrangement, not to mention their radically different upbringings, breeds tensions neither man could predict. Interrogating the origins of our contemporary political divide and its ties to masculinity and class, Apartment is a gutting portrait of one of New York’s many lost, disconnected souls by a writer with an uncommon aptitude for embodying them.

Teddy Wayne is the author of Loner, The Love Song of Jonny Valentine, and Kapitoil. He is the winner of a Whiting Writers’ Award and an NEA Creative Writing Fellowship as well as a finalist for the Young Lions Fiction Award, the PEN/Bingham Prize, and the Dayton Literary Peace Prize. He is a regular contributor to the New Yorker, the New York Times, and McSweeney’s.

"Teddy Wayne sets his fourth novel, the darkly comic and emotionally intelligent Apartment, in 1996. Part of the historical novel’s task is to look at the past not with nostalgia but with precision, and Apartment does this exactly. Beyond period details, though, the historical novel needs to give a sense for the talk and feel of the time — what could and couldn’t be spoken of, what could and couldn’t be imagined. And it’s in this deeper re-creation that Wayne elevates Apartment from a convincing historical facsimile to a work of art…. [he] looks at it all — masculinity, literary ambition, our decade of free trade and liberalism triumphant — and finds the rot underneath." - The Boston Globe

"There’s perhaps no living writer better at chronicling the most crucial emotional flash points of the young modern male than Teddy Wayne… Wayne’s knack for unpacking the fragility of masculinity continues to shine in his latest book, the slim, binge-worthy Apartment, especially when it’s bundled up in themes of artistic worth and privilege." - The A.V. Club

"It builds to a carefully seeded climax that will leave readers — and especially writers—queasy… subtly layered prose… its sobering climax is bound to stay with you long after you close the door on Apartment." - NPR

"Apartment is about a volatile friendship between two men… Wayne, in the terrible-roommates tradition of Sam Shepard and Miranda July, rigorously draws out their dance of attraction and repulsion." - The New York Times Book Review

"The best jokes make you laugh and feel sad all at once, and that….describes my response to Teddy Wayne’s fourth novel, Apartment, which takes on the subject of male friendship—and indeed, quite a bit more…. A taut story that the author bravely sees through to its inevitable end." - The New Republic

"Wayne's attention to detail and language serves almost as a surgeon's scalpel, gently peeling back layered topics — friendship, class, sexuality — to reveal an engrossing survey of male insecurity and frailty…Carefully written and evocative with an airtight plot." - Salon

"There’s a trickiness and intimacy to Wayne’s tale of two aspiring novelists that makes it more than a yarn about literary ambition. For one thing, it’s a savvy class novel." - USA Today

"Teddy Wayne’s fiction takes the reader into the minds of conflicted, sometimes toxic characters, to powerful effect. His latest novel, Apartment, chronicles the unlikely bond between two men who meet in 1996 New York and wrestle with their radically different worldviews. It’s a fascinating exploration of class, art, and human interaction." - Vol. 1 Brooklyn

"Teddy Wayne has a knack for taking the darkest thoughts and feelings men might have, holding a mirror up to them and then churning out books that will stick with you long after you finish them… Read Loner and Apartment to find out why Wayne is one of our most important contemporary authors." - Inside Hook "The 6 New Books You Should Be Reading This February"

"It’s 1996, and Wayne’s achingly lonely narrator is enrolled in Columbia’s M.F.A. program, where he finds solace in an unexpectedly intense friendship with a fellow student, Billy. When he offers Billy the chance to live rent-free in his apartment, the relationship becomes a crucible, driven by questions about power, class and masculinity." - The New York Times, “14 New Books to Watch For in February.”

"An amusing, increasingly uneasy account of an odd couple and their unstable power dynamic." - Vogue, Best Books of 2020 So Far

"A deftly composed novel…its ideas about masculinity, gender, and class will rattle around your mind for ages." - Elle, Best Books of 2020 So Far

"Wayne's latest foray into the dark minds of lonely young men follows the rise and fall of a friendship between two aspiring fiction writers on opposite sides of a vast cultural divide. . . . [He] captures the nuances of this dynamic—a musky cocktail of intimacy and rage and unspoken mutual resentment—with draftsmanlike precision, and when the breaking point comes, as, of course, it does, it leaves one feeling vaguely ill, in the best way possible. A near-anthropological study of male insecurity." - Kirkus Reviews, Starred Review

"Subtle, fascinating...Wayne excels at creating a narrator both observant of his surroundings and deluded about his own feelings...A careful meditation on class and power." - Publishers Weekly

"As he did in Loner (2016), Wayne emphasizes the gap between social isolation and an intense internal life, and uses the contrast to explore contemporary cultural anxieties in tenderly close focus." - Booklist

"Apartment, which brims with desperation, brilliantly captures the complex and complicated layers of loneliness…What follows is a subtle, sly page-turner about disconnection and its impact." - The Millions

"The rare page-turner that always maintains its dignity as a moving portrait of loneliness and longing." - Joshua Ferris

"Apartment is full of keenly observed, stinging insights that compound in intensity long after the initial read." - Ling Ma, author of SEVERANCE

"Apartment is a piercing investigation of male intimacy, privilege, and literary ambition that's as witty and insightful as it is heartrending. I couldn't look away." - Julie Buntin, author of MARLENA

"What a remarkable rarity--a guy-meets-guy novel about male friendship and intimacy. Apartment is a propulsive and powerfully focused exploration of masculine insecurity, anxiety, and ambivalence." - Chris Bachelder, author of THE THROWBACK SPECIAL

"In Apartment, class, ambition, and New York real estate are the components in one mortal's struggle to know the world and its surprises about who is outsmarting what. A terrific piece of work." - Joan Silber, author of IMPROVEMENT