Where the Bird Sings Best (Hardcover) 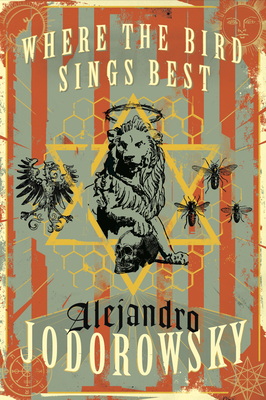 By Alejandro Jodorowsky, Alfred MacAdam (Translated by)
This item is currently unavailable and can not be ordered.
Unavailable

The magnum opus from Alejandro Jodorowsky—director of The Holy Mountain, star of Jodorowsky’s Dune, spiritual guru behind Psychomagic and The Way of Tarot, innovator behind classic comics The Incal and Metabarons, and legend of Latin American literature.

There has never been an artist like the polymathic Chilean director, author, and mystic Alejandro Jodorowsky. For eight decades, he has blazed new trails across a dazzling variety of creative fields. While his psychedelic, visionary films have been celebrated by the likes of John Lennon, Marina Abramovic, and Kanye West, his novels—praised throughout Latin America in the same breath as those of Gabriel García Márquez—have remained largely unknown in the English-speaking world. Until now.

Where the Bird Sings Best tells the fantastic story of the Jodorowskys’ emigration from Ukraine to Chile amidst the political and cultural upheavals of the 19th and 20th centuries. Like One Hundred Years of Solitude, Jodorowsky’s book transforms family history into heroic legend: incestuous beekeepers hide their crime with a living cloak of bees, a czar fakes his own death to live as a hermit amongst the animals, a devout grandfather confides only in the ghost of a wise rabbi, a transgender ballerina with a voracious sexual appetite holds a would-be saint in thrall. Kaleidoscopic, exhilarating, and erotic, Where the Bird Sings Best expands the classic immigration story to mythic proportions.

"Jodorowsky is today’s true Renaissance man—a master of many mediums that all point directly towards a towering and imaginative vision replete with profound insights into the real by way of the surreal. The stories told in Where the Bird Sings Best contain deep moral lessons, giving his mythic immigration story the feel of a modern day Sefer-ha-Aggadah—the classic collection of Jewish folk tales drawn from the Mishnah, Midrash and Talmud. This long awaited and brilliantly evocative translation is a must read—frightening, hilarious, outrageous, touching, and (as is always with Jodorowsky’s work) filled with a deep core of mystic truth."

"Where the Bird Sings Best is Alejandro Jodorowsky's brilliant, mad and unpredictable semi-autobiographical novel. Translated by Alfred MacAdam, this multigenerational chronicle introduces a host of memorable characters, from a dwarf prostitute and a floating ghost-Rabbi to a lion tamer who eats raw meat and teaches his beasts to jump through flaming hoops. Fantastical elements aside, Where the Bird Sings Best is a fiercely original immigration tale that culminates in the author's birth in Chile in 1929 — a complicated time in that nation's history. Combine that with poetry, tarot and Jewish mysticism and you have a genius's surreal vision brought to life.”

“Wildly inventive . . . Jodorowsky’s masterpiece swirls around the reader, lurching from violent episode to mystical encounter to cosmic sexual escapade as we follow our narrator’s grandparents’ journey from the old world to, refreshingly, South America. As the drama unfolds, the reader’s response veers from incredulity to awe, from doubt to delight. The momentum holds for the length of the novel as a cavalcade of outsized characters careen across the page in a frenzy that seems for once an adequate and just representation of the living fury that is history . . . The images possess an extreme yet striking beauty . . . In the case of Where the Bird Sings Best, he has masterminded a success.”

—The Los Angeles Review of Books

“This epic family saga, reminiscent of Gabriel Garcia Marquez's One Hundred Years of Solitude in structure and breadth, reads at a breakneck pace. Though ostensibly a novelization of the author's own family history, it is a raucous carnival of the surreal, mystical, and grotesque . . . It weaves together Jewish philosophy, passion, humor, Tarot, ballet, circuses, natural disasters, spectacular suicides, lion tamers, knife throwers, Catholic devotion, farmers, betrayals, prostitutes, leftist politics, political violence, and the ghost of a wise rabbi who follows the family from the Old World to the New.”

“First, a hard-boiled fact: No one alive today, anywhere, has been able to demonstrate the sheer possibilities of artistic invention — and in so many disciplines — as powerfully as Alejandro Jodorowsky . . . His new semi-autobiographical novel Where the Bird Sings Best, translated by Alfred MacAdam, is his magnum opus, a fantastical something that in many ways mirrors the author himself: It is brilliant, mad, unpredictable . . . It's not difficult to see why Where the Bird Sings Best has been compared to Gabriel García Márquez's One Hundred Years of Solitude. But Jodorowsky's saga stands firmly on its own . . . Reading Jodorowsky is not suspending reality; it is allowing yourself to believe that with imagination, anything and everything is in the realm of possibility . . . You can't be certain as to what exactly Jodorowsky is channeling in Where the Bird Sings Best — but it doesn't feel like it's native to our universe. Still, in this absurd and glorious carnival, he is the only one worthy to be called the keeper or tamer of anything.”

“A sweeping tale of personal, philosophical, and political struggles. It’s an immigrant’s story of Fellini-esque proportions . . . For the self-proclaimed atheist mystic, the sacraments are memory, dreams, family, wisdom, the grotesque, and the reinvention of the self . . . Publisher Restless Books reminds us that during Jodorowsky’s decades-long absence from cinema, he maintained his status as a notable Latin American novelist . . . A conduit and biographical key that further reveals his mesmerizing process of imaginative self-fashioning.”

“In his ancestral adventures, Jodorowsky brings to life not just the engaging story of his own family, but the mechanisms of engagement underlying story itself. Each paragraph pulsates, threatens to burst from its burgeoning body of details. Jodorowsky relieves pressure as necessary. But time after time, he proceeds to build up and dazzle all over again. One gets the sense when reading that at no point did Jodorowsky ever come up with something and save it for later. Each individual section is endowed with Jodorowksy’s full vitality.”

“I find myself impressed by his dilatory imagination, love of pure spectacle, and puckish sense of humor . . . Sober, dressed, and with all the lights on, I ripped through Where the Bird Sings Best — the first of Jodorowsky’s many novels to appear in English translation — in just a few enraptured days. The trick is to eschew caricature and give yourself over to the experience, at which point the wondrous strange takes over. The mind — and, god help me, the spirit — finds itself traveling in realms it could not have otherwise explored, or even dreamed exist . . . Where the Bird Sings Best is electrifying.”