We Are the Clash: Reagan, Thatcher, and the Last Stand of a Band That Mattered (Paperback) 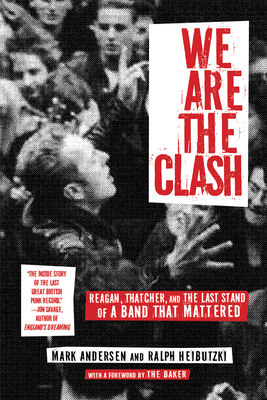 "The Clash's final chapter, after guitarist Mick Jones' 1983 departure, has largely been forgotten--until this book, in which authors Mark Andersen and Ralph Heibutzki argue that the punk pioneers were still creating vital music to the very end."
--Rolling Stone, an RS Picks / New Books

A BookRiot Loved pick for July

"In We Are The Clash, Mark Andersen and Ralph Heibutzki...are more interested in Strummer's strain to re-harness the power of punk to ignite opposition in the cynical Thatcher-Reagan era."
--The Current's Rock and Roll Book Club (Minnesota Public Radio)

"The Clash may have not been the best example of integrity in the music world with their careerist opportunism but their message of hope and possibility, cribbed from Reggae and Soul music, is all too important."
--Maximum Rocknroll

"When you think of The Clash, what comes to mind? Their early days in the London punk scene, perhaps, or the triumphant release of London Calling. We Are The Clash focuses on a very different moment in the band's history: the point at which the group splintered in the early 1980s, and its members grappled with an onset of reactionary governments around the world."
--Vol. 1 Brooklyn, included in the July 2018 Book Preview

"One of the most rewarding music books you'll come across this year...By focusing as much on the politics that motivated the Clash, We Are the Clash becomes a vital political history as much as an account of an underdocumented portion of a band's career. Great music books catalyze critical reconsiderations; We Are the Clash does one better, inviting readers to consider what matters to them: the creative commodities that artists produce? Or the ideals, however complexly and clumsily human they may be, that often compel artists to create in the first place."
--Johns Hopkins Magazine

"A gripping tale of the band's struggle to reinvent itself as George Orwell's 1984 loomed. This bold campaign crashed headlong into a wall of internal contraditions and rising right-wing power."
--Brooklyn Digest (blog)

"Given the number of books out there about The Clash, this is, as I stated, the only one to take a genuine, unbiased and in-depth appraisal of this era of the band. Given the quality of the writing, this could also be the most essential book about the band."
--Scanner Zine

The Clash was a paradox of revolutionary conviction, musical ambition, and commercial drive. We Are The Clash is a gripping tale of the band's struggle to reinvent itself as George Orwell's 1984 loomed. This bold campaign crashed headlong into a wall of internal contradictions, and rising right-wing power.

While the world teetered on the edge of the nuclear abyss, British miners waged a life-or-death strike, and tens of thousands died from US guns in Central America, Clash cofounders Joe Strummer, Paul Simonon, and Bernard Rhodes waged a desperate last stand after ejecting guitarist Mick Jones and drummer Topper Headon. The band shattered just as its controversial final album, Cut the Crap, was emerging.

Andersen and Heibutzki weave together extensive archival research and in-depth original interviews with virtually all of the key players involved to tell a moving story of idealism undone by human frailty amid a climatic turning point for our world.

Mark Andersen is the coauthor of Dance of Days: Two Decades of Punk in the Nation's Capital and author of All the Power. He lives in Washington, DC.Ralph Heibutzki (Chairman Ralph) is the author of Unfinished Business: The Life & Times of Danny Gatton. He lives in southwest Michigan.