Faith and Fear in Flushing: An Intense Personal History of the New York Mets (Paperback) 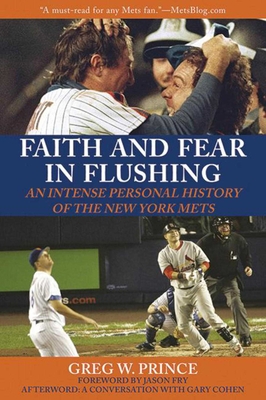 By Gary Cohen, Greg W. Prince, Jason Fry (Foreword by)
This item is currently unavailable and can not be ordered.
Unavailable

The New York Mets fan is an Amazin’ creature whose species finds its voice at last in Greg W. Prince’s Faith and Fear in Flushing, the definitive account of what it means to root for and live through the machinations of an endlessly fascinating if often frustrating baseball team.

Prince, co-author of the highly regarded blog of the same name, examines how the life of the franchise mirrors the life of its fans, particularly his own. Unabashedly and unapologetically, Prince stands up for all Mets fans and, by proxy, sports fans everywhere in exploring how we root, why we take it so seriously, and what it all means.

What was it like to enter a baseball world about to be ruled by the Mets in 1969? To understand intrinsically that You Gotta Believe? To overcome the trade of an idol and the dissolution of a roster? To hope hard for a comeback and then receive it in thrilling fashion in 1986? To experience the constant ups and downs the Mets would dispense for the next two decades? To put ups with the Yankees right next door? To make the psychic journey from Shea Stadium to Citi Field? To sort the myths from the realities? Greg Prince, as he has done for thousands of loyal Faith and Fear in Flushing readers daily since 2005, puts it all in perspective as only he can.

Greg W. Prince is cocreator of the blog Faith and Fear in Flushing, the daily destination for “Mets fans who like to read” since 2005. His memoir of the same name—“an intense personal history of the New York Mets”—was published in 2009 and was followed in 2016 by Amazin’ Again: How the 2015 New York Mets Brought the Magic Back to Queens. He has written about baseball for the New York Times, Huffington Post, Yahoo! Sports, and ESPN.com; served as a consultant to the film The Last Play at Shea; and helped organize the New York Mets 50th Anniversary conference at Hofstra University. He lives in Baldwin, New York.