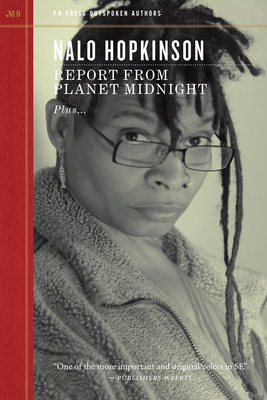 By Nalo Hopkinson
$12.00
Available from our distributor; usually Ships in 1-5 Days

Infused with feminist, Afro-Caribbean views of the science fiction and fantasy genres, this collection of offbeat and highly original works takes aim at race and racism in literature. In “Report from Planet Midnight,” at the International Association of the Fantastic in the Arts, an alien addresses the crowd, evaluating Earth's "strange" customs, including the marginalization of works by nonwhite and female writers. “Message in a Bottle” shows Greg, an American Indian artist, befriending a strange four-year-old who seems wise beyond her years. While preparing an exhibition, he discovers that the young girl is a traveler from the future sent to recover art from the distant past—which apparently includes his own work. Concluding the book with series editor Terry Bisson’s Outspoken Interview, Nalo Hopkinson shares laughs, loves, and top-secret Caribbean spells.

“Hopkinson has carved out a fertile niche in the science fiction and fantasy realm.”  —American Library Association

“The plot and style get an early grip on you, the reader, and you don't let go till story's end. Hopkinson is a genuine find!”  —Locus

“Hopkinson has had a remarkable impact on popular fiction. Her work continues to question the very genres she adopts, transforming them from within through her fierce intelligence and her commitment to a radical vision that refuses easy consumption.”  —Globe and Mail

"Insightful and engaging, the scant pages of this volume showcase Hopkinson's broad talents, vital insights, and scathing frankness about sociocultural matters that too many genre writers refuse to tackle." —Publishers Weekly (September 10, 2012)