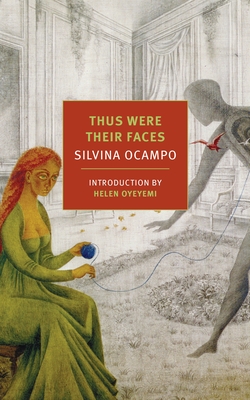 Thus Were Their Faces offers a comprehensive selection of the short fiction of Silvina Ocampo, undoubtedly one of the twentieth century’s great masters of the story and the novella. Here are tales of doubles and impostors, angels and demons, a marble statue of a winged horse that speaks, a beautiful seer who writes the autobiography of her own death, a lapdog who records the dreams of an old woman, a suicidal romance, and much else that is incredible, mad, sublime, and delicious. Italo Calvino has written that no other writer “better captures the magic inside everyday rituals, the forbidden or hidden face that our mirrors don’t show us.” Jorge Luis Borges flatly declared, “Silvina Ocampo is one of our best writers. Her stories have no equal in our literature.”

Dark, gothic, fantastic, and grotesque, these haunting stories are among the world’s most individual and finest.

Silvina Ocampo (1903–1993) was born to an old and prosperous family in Buenos Aires, the youngest of six sisters. After studying painting with Giorgio de Chirico and Fernand Léger in Paris, she returned to her native city—she would live there for the rest of her life—and devoted herself to writing. Her eldest sister, Victoria, was the founder of the seminal modernist journal and publishing house Sur, which championed the work of Jorge Luis Borges and Adolfo Bioy Casares, and in 1940 Bioy Casares and Silvina Ocampo were married. The first of Ocampo’s seven collections of stories, Viaje olvidado (Forgotten Journey), appeared in 1937; the first of her seven volumes of poems, Enumeración de la patria (Enumeration of My Country) in 1942.  She was also a prolific translator —of Dickinson, Poe, Melville, and Swedenborg—and wrote plays and tales for children. The writer and filmmaker Edgardo Cozarinsky once wrote, “For decades, Silvina Ocampo was the best kept secret of Argentine letters.” Silvina Ocampo: Selected Poems is published by NYRB/Poets.

Daniel Balderston is Andrew W. Mellon Professor  of Modern Languages at the University of Pittsburgh, where he chairs the Department of Hispanic Languages and Literatures and directs the Borges Center. He is currently completing his seventh book on Borges, titled How Borges Wrote. He has edited numerous books, including Voice-Overs: Translation and Latin American Literature, and has also translated books by José Bianco, Juan Carlos Onetti, Sylvia Molloy, and Ricardo Piglia.

Helen Oyeyemi is the author of five novels, including White Is for Witching, which won a 2010 Somerset Maugham Award; Mr. Fox, which won a 2012 Hurston/Wright Legacy Award; and most recently Boy, Snow, Bird. In 2013, she was named one of Granta’s Best Young British Novelists.

Jorge Luis Borges (1899–1986), a giant in Latin American letters, wrote numerous books of poetry, fiction, and essays, and was a prodigious translator of authors such as Kipling, Woolf, Faulkner, and Poe. He was a regular contributor to Victoria Ocampo’s journal Sur, and a frequent dinner guest of Silvina Ocampo and Bioy Casares. Over one of their legendary conversations, the three friends came upon the idea of editing the Antología de la Literatura Fantástica, which was published in 1940.

"These stories are feverish, cruel, and wry, set among the surrealisms of puberty, disability, and precarity." —Joshua Cohen, Harper's

“She lived a little in the shadow of her sister Victoria on the one hand and of her husband Bioy Casares and Borges on the other. She was an extravagant woman when writing her stories, short and crystalline, she was perfect.” —César Aira

“Dark, masterly tales...a (very good) introduction...a (very good) translator...Ocampo’s technique is beyond all reproach; an author has to keep masterly control when letting events veer off beyond the quotidian (the phrase 'magic realism' seems inadequate when applied to her).”  —Nicholas Lezard, The Guardian

“Ocampo wrote with fascinated horror of Argentinean petty bourgeois society, whose banality and kitsch settings she used in a masterly way to depict strange, surreal atmospheres sometimes verging on the supernatural.”  —The Independent

“Few writers have an eye for the small horrors of everyday life; fewer still see the everyday marvelous. Other than Silvina Ocampo, I cannot think of a single writer who, at any time or in any language, has chronicled both with such wise and elegant humor.” —Alberto Manguel

“Silvina Ocampo is one of our best writers. Her stories have no equal in our literature.” —Jorge Luis Borges

“Silvina Ocampo is, together with Borges and García Márquez, the leading writer in Spanish.” —Jorge Amado

“Magical….Ocampo’s earlier words resonate now with something of the 'clairvoyance' Borges once attributed to her….Mind-blowing hallucinogenic lines…make it important to take the stories in small, slow doses lest we zip by and miss them.” —Jill Schepmann, The Rumpus

“Sublime poet and eminent master of the modern fantastic—her heirs include Julio Cortázar, who praised her ability to summon the strangeness in the everyday, Roberto Bolaño, who declared that he “would live very happily in Silvina Ocampo’s kitchen,” and César Aira—Ocampo deserves to be heralded alongside the greatest Latin American authors of the 20th century…. her prose is intimate and precise, alert to detail…. Her poetic voice is often tranquil…. Yet when her poetry wanders into the terrain of people, Ocampo exhibits emotional dexterity and arresting candidness.” —Jose Teodoro, National Post

“Every story [evokes] a fantastic atmosphere – at once creepy and inviting. Ocampo is a literary angler, drawing her piscine audience closer to the hook with every mysterious sentence until we bite at the bait and she reels us in….Within is a strange world all its own, with memorable characters and elegant prose. It is worthy of becoming a popular classic and not just a forgotten footnote in Argentinian literature.” —Kenyon Ellefson, Portland Book Review

“In the dark world of Ocampo’s fiction, the familiar yet unsettling imagery of fantasy has a sense of reality that reality itself often lacks…. Ocampo can be cruel and cynical, but her spitefulness is clever, and, at her best moments, something tender lurks beneath the sadism. The punishments she cooks up for her characters are presented with unmistakable irony, and the results are frequently comedic and not infrequently touching.” —Becca Rothfeld, Bookforum

"Part of the pleasure of reading Ocampo – or rather the thrill, as some of her work is far from pleasurable – is never knowing what the next sentence will bring… Illogic and paradox shoot from the strange soil of her fiction, where dark, perturbing situations thrive… The range of Ocampo’s invention is impressive… Ocampo creates recognisable domestic settings that she then infects with strangeness. In her world a birthday party can become a funeral, objects collected in dreams can be brought into the waking world, and lovers flirt by exchanging stories of death.” —Chris Power, The Guardian