A Schoolboy's Diary and Other Stories (Paperback) 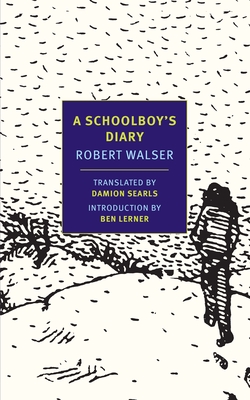 By Robert Walser, Damion Searls (Translated by), Ben Lerner (Introduction by)
This item is currently unavailable and can not be ordered.
Unavailable

A Schoolboy’s Diary brings together more than seventy of Robert Walser’s strange and wonderful stories, most never before available in English. Opening with a sequence from Walser’s first book, “Fritz Kocher’s Essays,” the complete classroom assignments of a fictional boy who has met a tragically early death, this selection ranges from sketches of uncomprehending editors, overly passionate readers, and dreamy artists to tales of devilish adultery, sexual encounters on a train, and Walser’s service in World War I. Throughout, Walser’s careening, confounding, delicious voice holds the reader transfixed.

Robert Walser (1878–1956) was born into a German speaking family in Biel, Switzerland. He left school at fourteen and led a wandering, precarious existence while writing his poems, novels, and vast numbers of the “prose pieces” that became his hallmark. In 1933 he was confined to a sanatorium, which marked the end of his writing career. Among Walser’s works available in English are Berlin Stories and Jakob von Gunten (both available as NYRB classics), Thirty Poems, The Walk, The Tanners, Microscripts, The Assistant, The Robber, Masquerade and Other Stories, and Speaking to the Rose: Writings, 1912–1932.

Damion Searls is a translator from German, French, Norwegian, and Dutch and a writer in English. His own books include What We Were Doing and Where We Were Going, The Inkblots, and The Philosophy of Translation. He received the Helen and Kurt Wolff Translator's Prize in 2019 for Uwe Johnson's Anniversaries.

Ben Lerner is the author of three books of poetry and three novels, mostly recently The Topeka School, which was a finalist for the Pulitzer Prize in 2020.

“Everyone who reads Walser falls in love with him.” —Nicholas Lezard, The Guardian

“A Paul Klee in prose, a good-humored, sweet Beckett, Walser is a truly wonderful, heartbreaking writer. In Walser’s fictions one is always inside a head, but this universe— and this despair—is anything but solipsistic. It is charged with compassion: awareness of the creatureliness of life, of the fellowship of sadness.” —Susan Sontag

“ Was Walser a great writer? If one is reluctant to call him great, said Canetti, that is only because nothing could be more alien to him than greatness.” —J. M. Coetzee, The New York Review of Books

“Robert Walser moves me more and more. . . . He is truthful without making a frontal attack on the truth, he becomes truth by walking around it.” —Elias Canetti

“To his eye, everything is equal; to his heart, everything is fresh and astonishing; to his mind, everything presents a pleasant puzzle. Diversion is his principal direction, whim his master, the serendipitous substance of his daily routine.” —William Gass

“If he had a hundred thousand readers, the world would be a better place.” —Hermann Hesse

“The magnificently humble. The enormously small. The meaningfully ridiculous. Robert Walser’s work often reads like a dazzling answer to the question, How immense can modesty be? If Emily Dickinson made cathedrals of em dashes and capital letters and the angle of winter light, Walser accomplishes the feat with, well, ladies’ feet and trousers, and little emotive words like joy, uncapitalized.” —Rivka Galchen, Harper’s Magazine

“A writer of considerable wit, talent and originality...recognized by such impressive contemporaries as Kafka, Brod, Hesse and Musil...[and] primarily known to German literary scholars and to English readers lucky enough to have discovered [his work]...[Walser’s tales] are to be read slowly and savored...[and] are filled with lovely and disturbing moments that will stay with the reader for some time to come.” —Ronald De Feo, The New York Times

“The incredible shrinking writer is a major twentieth-century prose artist who, for all that the modern world seems to have passed him by, fulfills the modern criterion: he sounds like nobody else.” —Benjamin Kunkel, The New Yorker