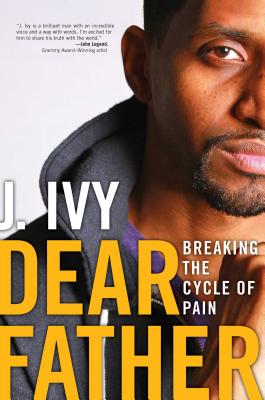 By J. Ivy
This item is currently unavailable and can not be ordered.
Unavailable

Hip-hop’s favorite poet and Grammy Award–winning artist J. Ivy bares his soul in this inspirational memoir of pain transformed into healing and empowerment.

J. Ivy is a true pioneer and trendsetter who’s bridged the worlds of hip-hop and poetry through his appearances on HBO’s Def Poetry and his collaborations with Kanye West and Jay-Z. But throughout his success, he carried with him the pain of being abandoned by his father and growing up in the tough neighborhoods of Chicago’s South Side.

So he sat down with pen and paper and processed his pain the only way he knew how—through poetry. The resulting poem, Dear Father, became his vehicle of forgiveness and healing. It is a pivotal poem that has touched and inspired the lives of millions.

Fused with his signature raw lyricism and street consciousness, J. Ivy’s memoir shows what it takes to deal with your emotions before your emotions deal with you. His story is personal yet universal, and will inspire others to channel whatever pain they have experienced into their own powerful gift of expression.

J. Ivy is a hip-hop poet, musician, actor, and speaker. He received a Peabody Award for his performance on Russell Simmons’s Def Poetry, as well as a Grammy Award for his contribution with Jay-Z on Kanye West’s The College Dropout album. J. has also collaborated with John Legend, RZA, The Last Poets, The Roots, Common, Mos Def, The Black Crowes, Bob Dylan, and many more. He supports his community through his Write to Live Academy and the Dear Father Initiative, which encourages young people to explore careers in the arts.

"J. Ivy is a brilliant man with an incredible voice and a way with words. I've known him for over a decade and owe my stage name to him believing in me back then before I even had a record deal. I'm excited for him to share his truth with the world."
— John Legend, multi Grammy award winning artist

"J. Ivy is a poet who has been able to bring truth, inspiration, and quality to his writings. I can always feel a spark when I come across his work."
— Common

"In his book, Dear Father, J. Ivy delivers a powerful message of hope, transforming his pain into power.  This book represents his life stories, and how poetry has helped him overcome adversity allowing him to make an impactful contribution to humanity.”
— Deepak Chopra

"I could say that J. Ivy has a way with words, I could say that he stands in a league of his own, I could say he's an amazing young talent—all of which while being true would be too obvious. I would like to say however that one of the marks of a great artist is the tone and sound of a voice. It was all these things; delivery and the sound of his voice that changed my perspective on his type of art. His voice in all facets of the word is simply legendary."
— Estelle, Grammy award-winning singer/songwriter

"J. Ivy has always possessed the ability to communicate the social consciousness of this Hip Hop generation. His work with Kanye West and others is revered globally. His 'Dear Father' poem touches me personally being a son who didn't grow up with my Father present in my life. What he articulates transcends economic and ethnic boundaries on many levels. Keep speaking brother the world needs healing.”
— Sway Colloway, host of The Wake Up Show on Eminem's Shade 45, journalist, producer, VJ for MTV

“I feel that J. Ivy is one of the most passionate and one of the most creative and deep thought provoking poets to come in a very longtime. I feel he is a very special spirit to give us so much incite and love and inspiration. He carries the blessing of our ancestors and that gift in his words brings us light as we travel through these dark times! J. Ivy is light! God bless you my bro.”
— Doug E. Fresh, "The World's Greatest Entertainer" and hip-hop legend

“It’s always a pleasure to work with someone who you can appreciate, someone who you respect, someone who you feel has talent, that can take us to the next level. He [J. Ivy] is a healing poet, a brother who is concerned about the future of us.”
— Abiodun Oyewole of The Last Poets

“The journey of life is simply about one thing, CONNECTION. How do we use the gifts we have been given to connect with the lives around us, to impact the people we encounter, and to change our world? J. Ivy has been blessed with a unique gift. He has the distinct ability to touch hearts and souls through the power of his voice, and to open eyes and minds through the truth of his words."
— Israel Idonije, NFL Veteran, Humanitarian, and Philanthropist

"J. Ivy is way more than a poet. He is a weaver of our fabric, a teller of our stories, a griot, an activist, a man. He has traveled the world fighting ignorance and injustice with his city on his back, the tears of his people in his pockets, and words as his weapons."
— Talib Kweli

“A Grammy-winning performance poet often seen on HBO’s Def Poetry, Ivy writes about his negligent father, his own life as a black male, living in a poor, rough Chicago neighborhood, his devotion to hip hop, and being in love and all the trials and tribulations that come with it. His memoir is a mixture of short, narrative, first-person chapters and some of the poems that he has performed across the country. Clever in his telling of stories, Ivy appeals to our sense of empathy and plays with our notions of fame in contrast to his own uncommon path of hard work and aesthetic endurance. What stands out most here is the redemption and escape Ivy found in language and art, in his commitment to writing poems and perfecting performance. Ivy finds solace in the title poem and in conversations with his friends and mentors, including performers Kanye West and Jay-Z, whose inspiration he shares. Ivy is a focused poet and entertainer discovering, in poetry and prose alike, the power and necessity of words.”
— Mark Eleveld