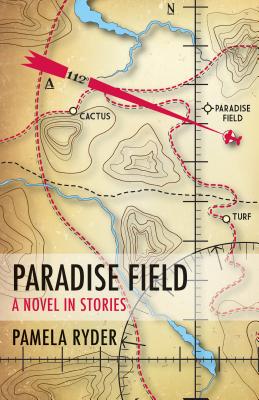 By Pamela Ryder
This item is currently unavailable and can not be ordered.
Unavailable

Interconnected stories depicting the last years of a WWII bomber pilot, his relationship with his daughter as both child and adult, and his drift into infirmity and death.

When life dwindles to its irrevocable conclusion, recollections are illuminated, even unto the grave. Such is the narrative of Paradise Field: A Novel in Stories, whose title is taken from a remote airfield in the American Southwest, and while the father recalls his flying days, his daughter—who nurses the old man—reflects as well.

Pamela Ryder’s stories vary in style and perspective, and time lines overlap as death advances and retreats. This unique and shifting narrative explores the complexities of a relationship in which the father—who has been a high-flying outsider—descends into frailty and becomes dependent upon the daughter he has never really known.

The opening story, “Interment for Yard and Garden,” begins as a simple handbook for Jewish burial and bereavement, although the narrator cannot help but reveal herself and her motives. From there, the telling begins anew and unfolds chronologically, returning to the adult daughter’s childhood: a family vacation in France, the grotesqueries of the dinner table, the shadowy sightings of a father who has flown away.

A final journey takes father and daughter back to the Southwest in search of Paradise Field. Their travels through that desolate landscape foreshadow the father’s ultimate decline, as portrayed in the concluding stories that tell of the uneasy transformation in the bond between them and in the transcendence of his demise. Taken together, the stories in Paradise Field are an eloquent but unsparing depiction of infirmity and death, as well as solace and provocation for anyone who has been left to stand graveside and confront eternity.

Pamela Ryder is the author of Correction of Drift: A Novel in Stories and the short story collection A Tendency Be Gone. Ryder lives in New York City.

“Let’s not futz around. I’m old, a Jew, a man who, but for the fates in charge of the trivialities, might have been Ryder’s father. Well, for all that, I am Ryder’s father or, anyhow, a father of Ryder, and will, accordingly, go agreeably to my grave praising her name as if my doing so might work for my daughter the favor of the gods. Let me tell you—in the matter of my thinking what must be said when an occasion such as this has come to take me by the heart: it was with tears in my eyes that I made my way through the pages recording Ryder’s mission to bury her dead in a manner unique among the methods practiced by humankind. Her art is water for the thirsty, sustenance for the deprived. I ask you, which of us is not perishing from the logic of the insufficiency woven into the world’s conceivable answer to our unappeasable cries? Ryder, her soul, her sentences, they are one thing, and this totality is given as an exception—the valedictory gesture of a mensch, this Pamela Ryder, enacting her livelong promise via the ceremonies of Paradise Field. Listen to me—my daughter brings comfort, brings balm, brings the exhilarations of loving and kinship to all those who would, by words, be cured.”
—Gordon Lish, author of Peru

"At once moving and merciless, Paradise Field presents in collage the life of a father as seen through a daughter's eyes, from her early life to his death and beyond.  An engaging and beautifully written meditation on endings, and how we do (or don't) manage to stumble past them."
—Brian Evenson, author of Collapse of Horses

“Ryder writes with wit, brio, and laser-like honesty about her father—a man who, having eluded her for decades, is now at the end of his life. The Kafkaesque nature of caretaking and the obscene depredations of age are interlaced with a kind of cockeyed delight: eating a blintz in hell, regarding the clouds, giving death the (frail) finger. Ryder has both the ear of a poet and the soul of a warrior.”
—Dawn Raffel, author of The Secret Life of Objects