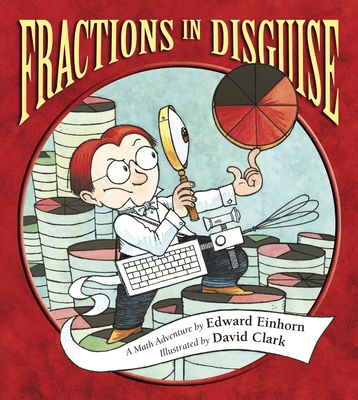 Crack the case with George Cornelius Factor in this entertaining math adventure that introduces simplified and reduced fractions with equal parts intrigue and humor.

When a valuable fraction goes missing, George Cornelius Factor (a.k.a. GCF) vows to track it down. Knowing that the villainous Dr. Brok likes to disguise his ill-gotten fractions, GCF invents a Reducer—half ray gun, half calculator— that strips away the disguise, reducing the fraction to its lowest common denominator and revealing its true form. With the Reducer in hand, George seeks out Dr. Brok in hopes of retrieving the missing fraction.

Back matter includes more detail on simplifying, or reducing, fractions.

Edward Einhorn is the author of A Very Improbable Story: A Math Adventure, as well as two Wizard of Oz sequels, The Living House of Oz and Paradox in Oz (Hungry Tiger Press, 2005 and 1999, respectively). Edward lives in New York City.

*Not only tackling fractions, but simplifying them, this fills a need and thoroughly entertains. George Cornelius Factor (G.C.F., get it?) collects fractions. But he's not alone: Baron von Mathematik and Madame de Géométrique also covet the 5/8 that is newly up for auction. But the nefarious Dr. Brok, a master of disguise, steals it. He "can take a 1/2 and turn it into a 2/4 or a 3/6. It's still the same fraction, but it looks different." George won't be deterred. He invents a Reducer-half ray gun, half calculator-that zaps fractions into their lowest terms and goes to Dr. Brok's mansion to confront him and find the 5/8. A clever bit of detective work and a rousing action sequence later, and the 5/8 is back to its lowest terms and part of George's collection. Throughout, Einhorn finds ways to humorously add fractions to his tale--the fraction lovers bid portions of $1 million, and Brok's mansion is 1/10 of a mile tall--and painlessly describes the process of reducing them to their lowest terms. Backmatter summarizes the learning, though not as simply as the text. Clark's ink-and-watercolor illustrations truly make the characters' personalities shine. Dr. Brok looks something like professor Hinkle of Frosty the Snowman fame, while the pages simply ooze with the aura of a great mystery.
No question--a large fraction of parents and teachers will be reaching for this.
-Kirkus Reviews, *starred review

Instead of collecting baseball cards or action figures, George collects fractions (illustrated as thick round discs mounted, trophy-like, on pedestals). At an auction, the tuxedo-clad boy competes against three rivals, including the nefarious Dr. Brok. The bidding for a coveted 5/9 approaches one million dollars when the lights go out and the fraction disappears. So does Dr. Brok. Armed with a homemade gizmo for reducing fractions, George follows the scoundrel to his mansion, where the boy must find the treasured 5/9, cleverly hidden in plain sight. A playwright, Einhorn manages to keep up the dramatic tension between the intrepid hero and the sneering villain while slipping in bits of fraction-wrangling information along the way. Using a restrained palette, cartoonist Clark boosts the story's comedy and its drama with his exaggerated portrayals of the characters and their actions. An appended page tells and shows how to reduce a fraction, an idea that even noncollectors may find useful. This amusing book could help lessen the all-too-common fear of fractions.
-Booklist

When the coveted 5/9 fraction is stolen from auction by the mysterious Dr. Brok, it is up to George Cornelius Factor to find the missing fraction and return it to its proper place. Knowing that Dr. Brok is notorious for disguising fractions (such as by turning 1/2 into 2/4 or 3/6), George invents the Reducer, a ray gun combined with a calculator, paper clips, whisk, and computer parts that reduces fractions to their lowest terms. Only after finding a missing sliver of Dr. Brok’s 34/63 fraction (thus becoming 35/63) and turning on the Reducer does George–voila!--find the 5/9 fraction. Although the mathematical procedure for simplifying fractions is provided in the illustrations, younger readers may need the assistance of an adult to fully grasp the concept. A closing "Reducing Fractions" page includes step-by-step instructions for finding both the greatest and lowest common denominators to properly reduce fractions. A fun mathematical addition to library collections.
-School Library Journal