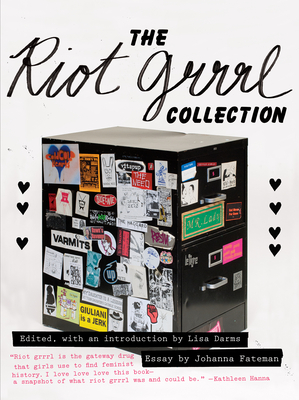 By Lisa Darms (Editor), Johanna Fateman (Introduction by), Kathleen Hanna (Preface by)
$34.95
Available from our distributor; usually Ships in 1-5 Days

For the past two decades, young women (and men) have found their way to feminism through Riot Grrrl. Against the backdrop of the culture wars and before the rise of the Internet or desktop publishing, the zine and music culture of the Riot Grrrl movement empowered young women across the country to speak out against sexism and oppression, creating a powerful new force of liberation and unity within and outside of the women's movement. While feminist bands like Bikini Kill and Bratmobile fought for their place in a male-dominated punk scene, their members and fans developed an extensive DIY network of activism and support. The Riot Grrrl Collection reproduces a sampling of the original zines, posters, and printed matter for the first time since their initial distribution in the 1980s and '90s, and includes an original essay by Johanna Fateman and an introduction by Lisa Darms.

Lisa Darms is Senior Archivist at the Fales Library & Special Collections at New York University, and is founder of the Fales Riot Grrrl Collection. She was a member of the art collective Thin Ice, and was an organizer of the first Ladyfest Festival, held in Olympia, Washington in 2000. Darms has published articles in the American Archivist, Archivaria, Women and Performance Journal, and The Believer.