Here Comes Everybody: The Story of the Pogues (Paperback) 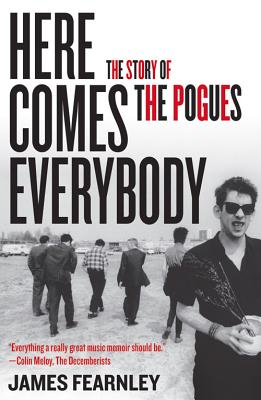 The Pogues injected the fury of punk into Irish folk music and gave the world the troubled, iconic, darkly romantic songwriter Shane MacGowan. Here Comes Everybody is a memoir written by founding member and accordion player James Fearnley, drawn from his personal experiences and the series of journals and correspondence he kept throughout the band’s career. Fearnley describes the coalescence of a disparate collection of vagabonds living in the squats of London’s Kings Cross, with, at its center, the charismatic MacGowan and his idea of turning Irish traditional music on its head. With beauty, lyricism, and great candor, Fearnley tells the story of how the band watched helplessly as their singer descended into a dark and isolated world of drugs and alcohol, and sets forth the increasingly desperate measures they were forced to take.

James Fearnley is a musician who played guitar in various bands, including the Nips with Shane MacGowan, before becoming the accordion player who still tours with the Pogues. He lives in Los Angeles.

“If you think all rock-music memoirs are a mixture of PR fluff, second-hand observations and strategically selected memories, then Here Comes Everybody: The Story of the Pogues is the book to make you change your mind. . . . That Fearnley hasn’t been quarantined for writing such a warts-and-all tale says much about the band and the bond formed across 30 fractious years. A band of brothers to the very end, then, and with a fine, salty memoir to raise a glass to.”  —Irish Times

“Fearnley’s book fits perfectly with the Pogues: for all their earthiness, they were a band concerned with myths, from the Irish legends MacGowan’s lyrics relocated to the back streets and pubs of north London to the persistent rock’n’roll fable of the damned, beautiful loser. [...] In the process, MacGowan became a mythic figure himself: a myth, despite the unsparing detail that Fearnley ends up burnishing.”  —Guardian

“Fearnley’s descriptions of Shane MacGowan, the front man of the Irish folk-rock band the Pogues, suppurate with pure deliciousness. . . . In his own way, MacGowan is the ideal protagonist—talented, inspired, and halitotic, but flawed. . . . Read it, and exhale.”  —Sunday Times

“Fearnley paints life on the road as a Brueghel painting, with the band submerged in the feral madness of their increasing detachment from normal life. But there is a joyous romanticism to their semi-impoverished wildness. MacGowan is perpetually clawing his face and masticating on super-strength Rennies, a bottle of wine attached to his lips.”  —Telegraph

"Fans of the Pogues... will be moved by this brutally honest account of a still much beloved band." —Publishers Weekly

“For Pogues fans (and folk-punk fans generally) and rock memoir aficionados; a fine example of the genre.” —Library Journal

“A must for Pogues fans everywhere.” —Booklist

“This is an old story, older than the ’80s even: the epic adventures of Anglo-Saxon troubadours led ’round the world by a growling Celtic demigod famous for good songs and bad judgment.” —Sarah Vowell, author of Assassination Vacation

“An insider’s look at the complicated, passionate dynamics of a wildly talented band of musical rogues who, despite great success, struggled to stay together amid immense personal challenges. Fearnley’s portrait of Shane MacGowan illuminates a man calling up the spirits of Behan and Byron, a rock and roll Rimbaud for our times.” —Tim Robbins, actor and director