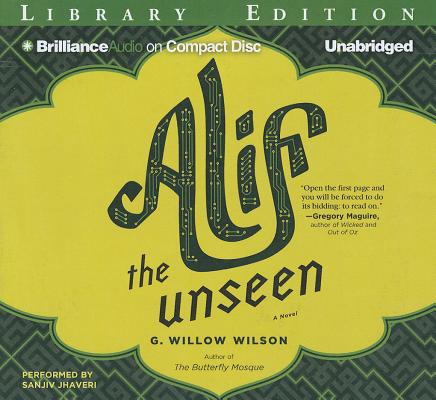 By G. Willow Wilson, Sanjiv Jhaveri (Read by)
This item is currently unavailable and can not be ordered.
Unavailable

“Alif is an Arab-Indian computer hacker who gets into deep trouble when he tries to erase himself from the web. His troubles only increase when he received an ancient text - written by the mythological Jinn - that may be the key to unlocking a whole new way of programming. This smartly written, action-packed thriller is reminiscent of the early works of Neal Stephenson and William Gibson. Unpredictable to the very end - I could not put it down!”
— James Wilson, Octavia Books, LLC, New Orleans, LA

In an unnamed Middle Eastern security state, a young Arab-Indian hacker shields his clients--dissidents, outlaws, Islamists, and other watched groups--from surveillance and tries to stay out of trouble. He goes by Alif--the first letter of the Arabic alphabet, and a convenient handle to hide behind. The aristocratic woman Alif loves has jilted him for a prince chosen by her parents, and his computer has just been breached by the state's electronic security force, putting his clients and his own neck on the line.

Then it turns out his lover's new fianc is the "Hand of God," as they call the head of state security, and his henchmen come after Alif, driving him underground. When Alif discovers The Thousand and One Days, the secret book of the jinn, which both he and the Hand suspect may unleash a new level of information technology, the stakes are raised and Alif must struggle for life or death, aided by forces seen and unseen.