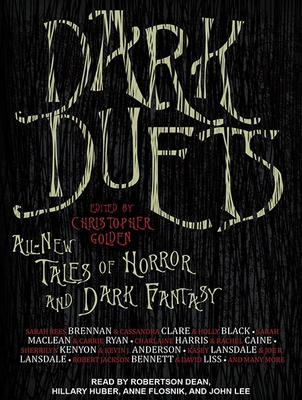 Dark Duets is a feast of eerie and mesmerizing horror, thriller, and dark fantasy tales-an ambitious and unique anthology featuring biting and atmospheric original stories from seventeen pairs of acclaimed writers, all collaborating together for the first time, including New York Times bestselling authors Charlaine Harris, Rachel Caine, Holly Black, Cassandra Clare, Stuart MacBride, Sherrilyn Kenyon, Jonathan Maberry, and David Liss. Penned by two authors-and in one case, a trio-who have never worked together before, the stories in this enthralling literary chemistry blend diverse elements and rich themes into mesmerizing and highly combustible tales that delve deep into the shadowy, unexplored realms of the imagination. On the night before Halloween, an unwitting young woman falls under the spell of a dangerous man-and into a terrifying multiverse-in "T Rhymer" by Gregory Frost and Jonathan Maberry. Sarah MacLean and Carrie Ryan explore the exquisite agony of eternal love in "She, Doomed Girl." "Welded" by Tom Piccirilli and T. M. Wright offers an unsettling vision of evil that infects and destroys lives. Mixing the ordinary with the extraordinary, these bold and vivid stories offer a compelling survey of the supernatural world that is sure to frighten and enchant.

Christopher Golden is the "New York Times" bestselling author of "Of Saints and Shadows," "The Myth Hunters," "The Boys Are Back in Town," and "Snowblind." He has edited the anthologies "The New Dead," "The Monster's Corner," and "21st Century Dead."

British narrator John Lee has read audiobooks in almost every conceivable genre, from Charles Dickens to Patrick O'Brian. He has won numerous Audie Awards and "AudioFile" Earphones Awards, and he was named a Golden Voice by "AudioFile" in 2009.

Anne Flosnik is an accomplished multi-award-winning British actress who has garnered two "AudioFile" Earphones Awards, an ALA Award, and three Audie Award nominations. Her narration of "Little Bee" by Chris Cleave was chosen as one of the Best Audiobooks of the Year 2009 by "AudioFile" magazine.

Hillary Huber garners consistently glowing reviews for her audio work. She has earned several Audie Award nominations, including for "A Field of Darkness" by Cornelia Read, and she is also an "AudioFile" Earphones Award winner. "AudioFile" magazine says, "Hillary Huber's narration is lyrical enough to be set to music."

Robertson Dean has recorded hundreds of audiobooks in most every genre. He's been nominated for several Audie Awards, won nine Earphones Awards, and was named one of "AudioFile" magazine's Best Voices of 2010.