Thirty-One Nil: On the Road With Football's Outsiders: A World Cup Odyssey (Paperback) 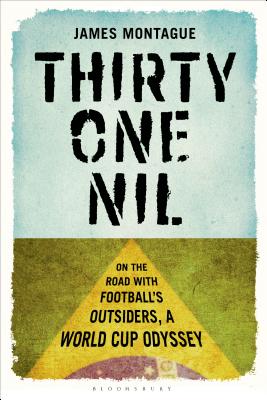 By James Montague
This item is currently unavailable and can not be ordered.
Out of Print

In a tiny, decaying aluminium smelting town in southern Tajikistan, a short drive from a raging war zone, Afghanistan take on Palestine in the first Asian qualifier for 2014's World Cup in Brazil. Every player on both teams is risking something by playing: their careers, their families, even their lives. Yet, along with thousands of other footballers backed by millions of supporters, they all dream of snatching one of the precious 32 places at the finals; and so begins a three-year epic struggle – long before the usual suspects start their higher-profile qualifying campaigns under the spotlight.

Named after the greatest victory (and defeat) that the World Cup qualifiers have ever seen (Australia's 31-0 victory over American Samoa), Thirty-One Nil is the story of how footballers from all corners of the globe begin their journey chasing a place at the World Cup Finals. It celebrates the part-time priests, princes and hopeless chancers who dream of making it to Brazil, in defiance of the staggering odds stacked against them. It tells the story of teams who have struggled for their very existence through political and social turmoil, from which they will very occasionally emerge into international stardom.

From the endlessly humiliated San Marino to lowly Haiti; from war-torn Lebanon to the oppressed and fleet-footed players of Eritrea, in Thirty-One Nil James Montague gets intimately and often dangerously close to some of the world's most extraordinary teams, and tells their exceptional stories.

James Montague is a journalist and author who writes for the New York Times, CNN, GQ and World Soccer, reporting from the Middle East and beyond. His first book When Friday Comes: Football in the War Zone won him Best New Writer at the 2009 British Sports Book of the Year Awards. He was described in Sports Illustrated as 'The Indiana Jones of soccer writing.' He appears regularly on CNN as well as writing and producing regular radio shows for the BBC World Service's award winning World Football show.

“[Montague] captures a dazzling amount of detail . . . Thirty-One Nil is well worthy of entry to the canon of great football reportage.” —The Independent

“It's a fantastic book!” —Grant Wahl

“Vibrant and colourful . . . Thirty-One Nil is a brilliant read.” —Back Page Football

“A gripping tale . . . Montague's book is a tale of dreaming despite the odds, and its strength lies in the many compelling individuals featured in its pages.” —South China Morning Post

“A compelling, exciting book . . . let Thirty-One Nil take you on an emotional journey that rekindles your love of international football.” —These Football Times

“As heartwarming as it is heartbreaking.” —FourFourTwo

“A vibrant, at times emotional, chronicle.” —Independent on Sunday

“Passionate and moving and provides further evidence of the universality of football.” —FourFourTwo on When Friday Comes

“Particularly recommended if you prefer your sporting non-fiction to have a dash of humour and a sprinkling of history.” —Observer on When Friday Comes

“An excellent book, which is so, so much more than a book about sport or football; it is also a travelogue and a treatise on the politics of the Middle East . . . one of the most fascinating sports books of 2008.” —Scotland on Sunday on When Friday Comes