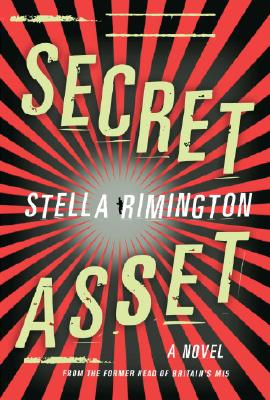 With her debut novel, At Risk, Stella Rimington established herself as a top-notch thriller writer, and introduced us to Liz Carlyle—a smart, impassioned MI5 intelligence officer whose talents and ambitions are counterbalanced by an abiding awareness of her job’s moral complexities. In Secret Asset, we are plunged back into her high-stakes, high-tension world.

Liz has always been particularly skilled at “assessing people,” and when one of her agents reports suspicious meetings taking place at an Islamic bookshop, she trusts her instinct that a terrorist cell is at work. Her boss, Charles Wetherby, Director of Counter-Terrorism, knows to trust Liz’s instincts as well: he immediately puts a surveillance operation into place.

So Liz is surprised when Wetherby suddenly takes her off the case. And she’s shocked to hear why: Wetherby has received a tip-off that a mole—a “secret asset”—has been planted in one of the branches of British Intelligence. If this is true, the potential damage to the Service is immeasurable. As her colleagues work to avert an impending terrorist strike, Liz is charged with the momentous task of uncovering and exposing the mole before it’s too late.

As she did in At Risk, Stella Rimington once again brings all her experience as the first woman Director General of MI5 to bear in a heart-stopping thriller that takes us deep into a “wilderness of mirrors” where nothing is what it seems and no one can be trusted.

“Fast-moving . . . Rimington continues to deliver on the promise of spy fiction written not only by a former spy but also by the head of British intelligence. This is a smartly constructed, sharply written thriller that exudes realism and a professional’s eye for detail . . . Rimington also proves adept at building characters and constructing plots.”
–David Pitt, Booklist

“Those interested in old school British intelligence thrillers will find much to like in the smart, enterprising Carlyle . . . Much is made of the authenticity of Rimington’s tradecraft (she was the first female head of MI5 in real life), and rightly so.”
–Publishers Weekly

“[Secret Asset has] whiplash control of momentum that raises your pulse a heartbeat at a time until the climax.”
–Kirkus Reviews