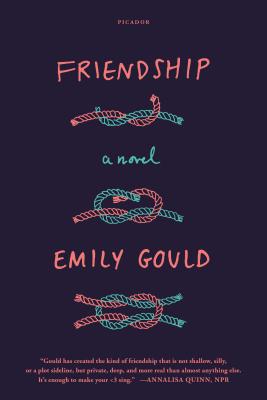 By Emily Gould
$19.00
Available from our distributor; usually Ships in 1-5 Days

Emily Gould's debut novel is a searching examination of a best friendship that is at once profoundly recognizable and impossible to put down.

Bev Tunney and Amy Schein have been best friends for years, but now, at thirty, they're at a crossroads. Bev is a hardworking Midwesterner still mourning a years-old romantic catastrophe that derailed her career. Amy is an East Coast princess, whose luck and charm have, so far, allowed her to skate through life. Bev is stuck in a seemingly endless cycle of temping, drowning in student loan debt, and (still) living with roommates. Amy is riding the tailwinds of her early success, but her habit of burning bridges is finally catching up to her. And now Bev is pregnant.

As the two are dragged, kicking and screaming, into real adulthood, they are confronted with the possibility that growing up might also mean growing apart.

Emily Gould is the author of And the Heart Says Whatever and the co-owner, with Ruth Curry, of a feminist publishing startup, Emily Books, which sells new and backlist titles via a subscription model. She has written extensively for many publications, including The New York Times, The New York Times Magazine, MIT’s Technology Review, Poetry, the London Review of Books, n+1, The Guardian, The Economist, Slate, and Jezebel, and was an editor at Gawker in 2008. She is best known as a blogger, having maintained a popular online presence since 2005 at Emily Magazine. She lives in New York.

“Gould has created the kind of friendship that is not shallow, silly, or a plot sideline, but private, deep, and more real than almost anything else. It's enough to make your <3 sing.” —Annalisa Quinn, NPR

“With Friendship, Gould establishes herself as a distinctively contemporary literary voice. Her dialogue resounds, and her dark humor gives texture to the prose. And though Friendship focuses on young women, readers need be neither young nor female in order to enjoy it....This is a very human story for any of us who have ever been jealous of a friend or wished our friends were more jealous of us.” —Grace Bello, Christian Science Monitor

“More than an exploration of friendship, this novel is about what happens when the things we take for granted slip away and we are forced to come up with new ways of being . . . Gould does a fine job capturing the women's frustrations, big and small, and the ways in which their friendship serves both as a hindrance and a means to maturing.” —Shoshana Olidort, The Chicago Tribune

“Friendship, a slim, sometimes piercing novel, is a sharply observed chronicle of the inequality inherent in even the most valued friendships.” —Alyssa Rosenberg, The Washington Post

“As Gould exposes [Amy and Bev's] messiness--their fights, mortifying Gchat convos, acts of self-sabotage -- she almost dares you to judge them. But the specificity of their struggles (peanut butter soup for dinner, anyone?) and Gould's hyperaware voice lend the story of their friendship poignance and shades of relatability. A-” —Stephan Lee, Entertainment Weekly

“Set in hipster Brookly, former Gawker editor Gould's latest centers on Bev and Amy, 30-year-olds struggling to be grown-ups in a world where moving back home while working for peanuts is often the only course. It's a wry, sharply observed coming-of-age story for the postrecession era.” —People

“There's a difference between mere adulthood, which is legally defined, and being a grown-up, which is fuzzy and subjective. For the characters in Gould's funny and affecting debut novel, this difference is sharply felt . . . The novel's depiction of the dynamics of friendship--how there's often affection and admiration mixed with envy and competition--feels authentic.” —Naoko Asano, Maclean's

“Friendship is interested--almost single-mindedly so--in the friendship between Amy and her friend Bev, two women who are in the process of discovering that life as 30-year-old women in New York City is vastly different than it was as twentyish-year-old women in New York City. The poverty earned from a career in the publishing industry is no longer charming or noble; the string of half-assed relationships doesn't seem very romantic anymore . . . Friendship is refreshing in part because it's hugely uninterested in the men in Amy and Bev's lives; they're blurry figures, pushed over to the periphery to marinate in their monstrous desires or their bland hopes of commitment.” —Paul Constant, The Stranger

“It's easy to melt into the lives of these women as they deal with that particularly modern problem: becoming an adult at the age of 30. And though stories about women's friendship are very on-trend these days--from Sheila Heti's How Should A Person Be? to Girls to Broad City--it's hard to say no to another one, especially one as honest and lived-in as this one.” —Sonia Saraiya, The AV Club

“In Ms. Gould's . . . often sharply observed first novel, Friendship . . . Amy and Bev have just crossed a microgenerational line into their 30s, and there's a self-conscious, faintly melancholy tone to [the novel]: the girls' sense of looking back on the turmoil (and, in Amy's case, hubris) of their swiftly receding 20s with both alarm and nostalgia, worried that things are starting to add up, that the clock is ticking more loudly now, that the arithmetic of their lives is changing . . . Depicting Amy and Bev in the third person gives Ms. Gould a measure of perspective on--and distance from--her characters, enabling her to depict their follies and foibles with a mixture of sympathy and humor. The novel form . . . also accentuates Ms. Gould's strengths as a writer.” —Michiko Kakutani, The New York Times

“[Friendship is a] very fine first novel . . . Most of us know honesty as a virtue, and fewer know it as a sneaky concept in the craft of fiction. The latter honesty is about eschewing cliché, mastering particular skills for making the reader feel confided in. The novel, or publishing itself, might be in jeopardy, but writing will live as long as there remains the distinct pleasure of being told an honest thing.” —M. C. Mah, The Rumpus

“Gould is a gifted documentarian. The novel is filled with keenly observed details, especially about the outsize role that technology plays in her characters' lives. ‘Are those Google predictions real?' Amy asks at one point. ‘Do they work? They do, don't they. Okay, cool, another thing I have to start paying attention to so that my life can be fully efficient and optimized.'"—Nora Krug, The Washington Post
“Two young women try to create the glamorous lives they've imagined for themselves while talking on Gchat from their desks at their less-than-ideal jobs. Bev left her cool-sounding but dispiriting entry-level position at a Manhattan publishing house to follow her boyfriend to the Midwest. Bad move. Now she's back in New York, single again, and temping.” —Kirkus (starred review)

“There is a sentimental delight in reading Friendship and its roller coaster ride of urban highs and lows . . . In the end, Gould draws a vivid and convincing portrait of a friendship--in all of its human misunderstandings, disappointments, and brokenness . . . It is no small feat to animate and chart the emotional fluctuations and subtle contours of female friendships on the page.” —S. Kirk Walsh, The Virginia Quarterly Review

“Work--sustained creativity, the problems of receiving too much attention, too fast and too young, paycheques, temp gigs, what it all might add up to and protect from--is as much a theme of the book as friendship is. The novel has a disarmingly for-real sense of these kinds of women's lives, and features high-def, immersive verisimilitude about roommates, instant messages, storage units, job applications, buses, shirts, drinks and, largely, money; these are, of course, also the quotidian but hugely meaningful circumstances that create, maintain and end friendships, especially between women, especially in cities.” —Kate Carraway, The Globe and Mail (Toronto)

“A savvy first novel that, in piercing prose, zeroes in on modern ennui and the catalysts that force even the most apathetic out of their complacency.” —Booklist

“Gould's novel is admirably, readably realistic--she knows these girls and the world they live in (including the omnipresence of technology and the way that it pervades relationships) . . . Gould nails the complex blend of love, loyalty, and resentment that binds female friends. It is worth reading for the richness of its details (at one point, Amy is overwhelmed by the desire to put an engaged coworker's wedding ring in her mouth), and it offers new insight into the experience of young women.” —Publishers Weekly

“I read Friendship with great pleasure. Emily Gould re-creates with wit and insight the New York I know: a place full of fame and money that's not yours, where friends become family and lovers become ex-lovers, and the big questions about your life stay unanswered, and unanswerable, for a long time.” —Chad Harbach, author of The Art of Fielding

“Friendship is especially honest about professional insecurity and personal uncertainty, which makes it an especially funny novel. And Emily Gould's prose sounds so admirably up-to-the-minute because it so faithfully observes classical principles of transparency and directness.” —Benjamin Kunkel, author of Indecision

“Friendship is a moving, focused, highly readable, very funny novel, told with a calming amount of perspective by a trustworthy, precise voice. It is intimate and insightful regarding two decades of life (early twenties to middle age), and on the topics of endurance (emotional, financial), relationships (work, platonic, romantic--human), and jobs (temp, Internet, freelance art) in New York City.” —Tao Lin, author of Taipei

“Truth-teller Emily Gould hurls her heart and her mind into this hilarious, bittersweet tale of the urgent, everyday need for connection between women.” —Jami Attenberg, author of The Middlesteins

“The book . . . has moments of deep tenderness, spaces where the fundamental pain of being a non-affluent woman in a sexist capitalist culture is mitigated by the power of friendship and community. The confusion and woe the characters experience as they thrash around their tiny apartments and dysfunctional workplaces is funny and occasionally heartrending. In spite of how backwards some of the actions and beliefs of Amy and Bev seemed to me--or perhaps because of the backwardness--I found myself rooting for them.” —Eli Schmitt, Full Stop