Boy and Bot (Board book) 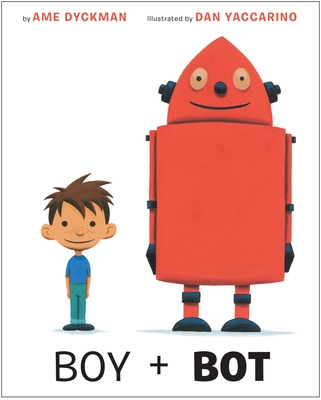 “This is a great picture book to show that we're all different and have different needs and ways of living, even while we are very much alike! This story of an adorable duo will win the hearts of readers of all ages and is wonderfully illustrated by Dan Yaccarino.”
— Elizabeth Anker, Alamosa Books, Albuquerque, NM

The story of an irresistible friendship between a boy and a robot, now in board for little hands.

One day, a boy and a robot meet in the woods. They play. They have fun. But when Bot gets switched off, Boy thinks he’s sick! So Boy tucks the bot into bed and falls asleep. Bot is worried when he powers on and finds his friend powered off. He takes Boy home with him and tries all his remedies: oil, reading an instruction manual. Nothing revives the malfunctioning boy! Can the Inventor help fix him?

Using the perfect blend of sweetness and humor, this story of an adorable duo will win the hearts of the very youngest readers.

Ame Dyckman reads and writes picture books when she should be sleeping. She’s the award-winning author of Boy + Bot, Tea Party Rules, Wolfie the Bunny, and more. Ame lives in New Jersey with her family, her crazy cat, and the characters from her books. Learn more at amedyckman.com.

Dan Yaccarino is an internationally acclaimed author-illustrator with more than thirty books to his credit. Dan is also the creator of the animated TV series Oswald. He lives in New York City with his wife and two children. Learn more at danyaccarino.com.

Starred Review, Booklist, April 1, 2012:
"“The final, nearly wordless pages, with snapshots of the friends at play, are priceless.”

Starred Review, Kirkus Reviews, February 15, 2012:
“Dyckman’s debut offers pitch-perfect pacing and gentle humor…. as Boy and Bot would say, it’s ‘affirmative’ that this book will be a hit.”

Review, The New York Times Book Review (online edition), April 11, 2012:
“It’s a perfectly adorable, age-appropriate friendship. And it’s simply impossible to imagine a 4-year-old boy not wanting to be friends with this book.”