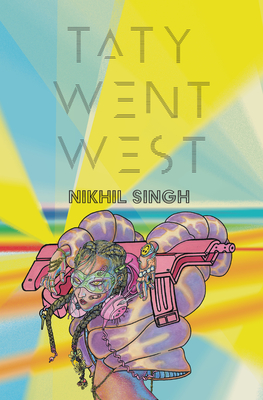 By Nikhil Singh
This item is currently unavailable and can not be ordered.
Unavailable

Taty is a troubled teen running away from home. She quickly finds herself kidnapped by a malicious imp in the dinosaur-infested Outzone. While confronting demons of her own, Taty finds herself in a chaotic world full of evangelizing robot nuns, Buddhist punks, and the ominous Dr. Dali. Nikhil Singh has created a truly unique universe with a bold, petulant heroine one can't help but cheer for.

Called “a hallucinogenic post-apocalyptic carnival ride” by Lauren Beukes, Taty Went West is told with bold swagger and otherworldly imagination by one of Africa's most promising new writers. As Billy Kahora, managing editor of Kenya's Kwani Trust, says, “Savvy, ultra-modern, Taty straddles the mediated realities of our own continent and the groundbreaking possibilities of our ongoing universal imaginaries.”

Nikhil Singh is an artist, writer, musician and film-maker. They have fronted the critically acclaimed South African art-rock bands, The Wild Eyes and Hi Spider, as well as released a plethora of solo albums under the moniker, “Witchboy." They have recently written and directed a feature-length film, Trillzone (2014), which was commissioned by the South African National Arts Festival as part of a J.G. Ballard symposium. As an artist, they have illustrated the graphic novels, The Ziggurat and Salem Brownstone, which was longlisted for The Branford Boase Award. Their work has also been featured in Pictures and Words: New Comic Art and Narrative Illustration, Dazed, I-D Online, Creative Review, The Times (UK), Mail & Guardian (UK), The Independent (UK), Rolling Stone (SA), GQ (SA), and featured as part of the COMICA festival exhibition at the ICA.