A Long Curving Scar Where the Heart Should Be (Paperback) 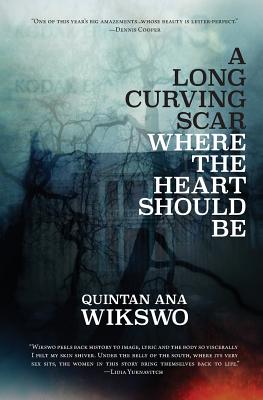 A searing, sensual novel with photographs, A Long Curving Scar Where the Heart Should Be weaves together southern fabulism and gothic fury, pulling at the restless, volatile threads of seditious American iconoclasts Zora Neale Hurston, Patti Smith, Cormac McCarthy, and Toni Morrison. At this devil's crossroads of the King James Bible and the Egyptian Book of the Dead emerge the ghosts and realities of sex, race, violence, and hauntingly vulnerable emotion. Quintan Ana Wikswo has written an unforgettable and relentless reinvestigation of the American soul.

A Long Curving Scar Where the Heart Should Be unfolds on the unruly, mixed-race, queer-sexed margins of a conservative 1930s Southern town. In the wake of abandonment by her husband, an impoverished young midwife and her twin daughters create a hospice and sanctuary for the town's outcasts within a deserted antebellum plantation house. The twins inhabit a fantastical world of ancient resistances, macabre births, glorious deaths, ravenous love affairs, clandestine sorceries, and secret madnesses--a site where the legacies of catastrophic injustice, bigotry, brutality, and grief contend with unquenchable desires for restitution, wholeness, sexual liberty, and lives of freedom outside the chokeholds of racism, misogyny and social constraint. Overshadowed by lingering scandals of miscegenation, the persistence of searing endemic violence, and a troubling secrecy surrounding their father's disappearance, the women begin to walk into the discomforting limitations of their myths and wounds, and create their own new maps of sexual and personal fulfillment, resilience, and transformation. When the town claims that he is closer than they think, the women must decide whether his reappearance would offer wholeness, or unbearable consequences to their own hardfought, courageous journeys towards existential insurrection