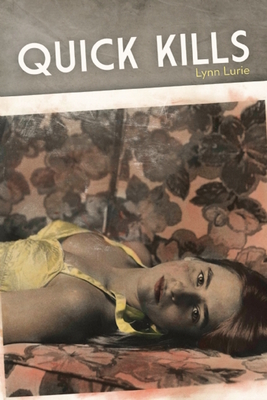 By Lynn Lurie
$14.00
Available from our distributor; usually Ships in 1-5 Days

Our first excursion was to the Bronx Zoo. The Photographer wanted to shoot me holding a python. The snakemaster wrapped the thickest, blackest one around my shoulders. An employee of the zoo offered to take a picture of the python and me with the Photographer, referring to me as the Photographer's daughter. At that moment the snake picked up its head and began to slither towards my face. I did not scream. I pleaded with the snakemaster to take the python off me.

After the snake was in its tank, I washed my hands with a special soap. One wash was not enough. He let me wash as many times as I wanted. . . .

There is fear in my eyes. I see the fear clearly even in the blurred snapshot. The adults waiting in line with their children must have seen it too. Fear like I have seen in my sister's eyes.

Quick Kills chronicles the desperate longing to belong as well as the effect of neglect, familial absence, and the nature of secrets. The young female narrator is seduced by an older man who convinces her that she is the perfect subject for his photographs. Meanwhile, the narrator's sister embarks on an equally precarious journey. Never clearly delineating the border between art and pornography, the narrator's escalating disquiet is evidence that lines have been crossed.

Lynn Lurie is an attorney with an MA in International Affairs and a MFA in writing. Quick Kills is her second novel.

Lynn Lurie is an attorney with an MA in International Affairs and a MFA in writing. Quick Kills is her second novel.