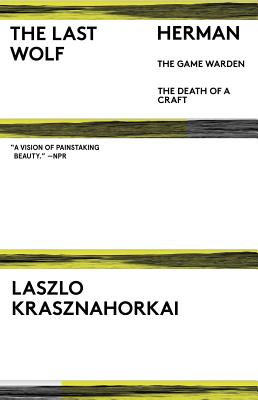 Now in paperback, two novellas from the Hungarian master László Krasznahorkai—“one of the most mysterious artists now at work” (Colm Toíbín)

The Last Wolf (translated by George Szirtes) is Krasznahorkai in a maddening nutshell—it features a classic obsessed narrator, a man hired (by mistake) to write the true tale of the last wolf in Spain. This miserable experience (being mistaken for another person, dragged about a cold foreign place, and appalled by a species’s end) is narrated—all in a single sentence—as a sad looping tale, a howl more or less, in a dreary Berlin bar to a patently bored bartender.

Herman (translated by John Batki), “a peerless virtuoso of trapping who guards the splendid mysteries of an ancient craft gradually sinking into permanent oblivion,” is asked to clear a forest’s last “noxious beasts.” He begins with great zeal, although in time he “suspects that maybe he was ‘on the wrong scent.’” Herman switches sides, deciding to track entirely new game …

The winner of the 2019 National Book Award for Translated Literature and the 2015 Man Booker International Prize for lifetime achievement, László Krasznahorkai was born in Gyula, Hungary.

John Batki is a kilimologist, writer, translator, and visual artist. He was born in Hungary and has lived in the United States since age fourteen.

George Szirtes (b. 1948) is an award-winning poet and translator who settled in England after his family fled the Hungarian Uprising of 1956.

Gateway drugs to Krasznahorkai’s work: As the very best fiction always does, they bring another world—an alien world, let’s say—into our own.
— Christine Smallwood

Together, ‘The Last Wolf’ and ‘Herman’ raise a set of spiritual questions that affirms their author as one of the most important — and eccentric — writers working today.
— Hari Kunzru