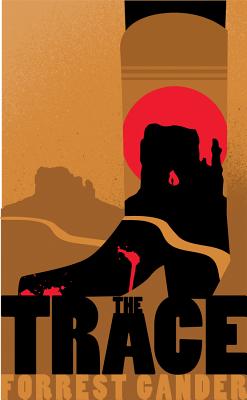 By Forrest Gander
This item is currently unavailable and can not be ordered.
Unavailable

In the kitchen of literature, Forrest Gander's The Trace is your slow cooker. Contents within are revealed, over time, to be distinct, enriching, and (almost alarmingly) satisfying. Here, a couple in the wake of a traumatic, unspoken event involving their son, are on the road in Mexico. They're visiting the various alleged death sites of the American author Ambrose Bierce, they're sitting in silence, they're dodging suspicious stares from the locals and the glare of the sun. And then they're stranded in the middle of the Chihuahua desert. Tense and poetic, welcome this hearty, heady broth into your system. (Chad)

A Mexican road novel of love, hate, drugs, and the Mexican Revolution.

The Trace is a masterful, poetic novel about a journey through Mexico taken by a couple recovering from a world shattered.  Driving through the Chihuahua Desert, they retrace the route of nineteenth-century American writer Ambrose Bierce  (who disappeared during the Mexican Revolution) and  try to piece together their lives after a devastating incident involving their adolescent son. With tenderness and precision, Gander explores the intimacies of their relationship as they travel through Mexican towns, through picturesque canyons and desertcapes, on a journey through the the heart of the Mexican landscape. Taking a shortcut  through the brutally hot desert home, their car overheats miles from nowhere, the novel spinning out of control, with devastating consequences. . . . Poet Forrest Gander’s first novel As a Friend was acclaimed as “profound and relentlessly beautiful (Rikki Ducornet). With The Trace, Gander has accomplished another brilliant work, containing unforgettable  poetic descriptions of Mexico and a story both violent and tender.

Forrest Gander was born in the Mojave Desert and grew up in Virginia. In addition to writing poetry, he has translated works by Coral Bracho, Alfonso D’Aquino, Pura Lopez-Colome, Pablo Neruda, and Jaime Saenz. The recipient of grants from the Library of Congress, the Guggenheim, Howard, Whiting, and United States Artists Foundations, he taught for many years as the AK Seaver Professor of Literary Arts & Comparative Literature at Brown University.

As in his previous works, Gander shows he is keenly aware of the loneliness that imbues human suffering and sets grief alight using beautiful, tense, haunting prose.

What really haunts Gander, who is a translator as well as a poet, isn’t so much death as the complexities of life: the frequently unknown stories that lie beneath and within the stories we tell.

His work burrows into the particularities of disparate places and cultures in order to sound the differences between them.

A moving elegy. It is also proof that language has magical potential.
— Joanna Scott

The clarity of his artistic vision, formal innovation, and emotional honesty are enviable.

In this strange and beautiful novel as in life, love is part of what is sacred.
— Jeanette Winterson

The Trace is a poet's book, which is to say it is filled with the pleasures of language, sharply and skillfully used, but Forrest Gander also has the narrative drive of the best novelists. The Trace is a tense, propulsive thriller, which keeps on building until the very last page.

Gander's novel surges. No other writer that I know of has so accurately and carefully depicted the tiny internecine battles of two lovers on an interminable drive as does Gander in this book.
— Lowry Pressly