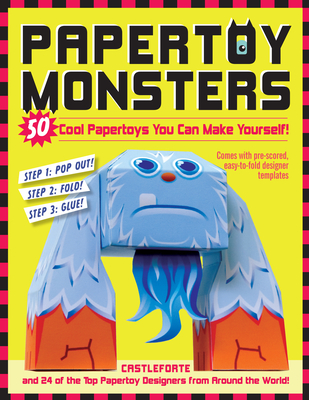 A breakthrough paper-folding book for kids—paper airplanes meet Origami meets Pokemon. Papertoys, the Internet phenomenon that’s hot among graphic designers and illustrators around the world, now comes to kids in the coolest new book. Created and curated by Brian Castleforte, a graphic designer and papertoy pioneer who rounded up 25 of the hottest papertoy designers from around the world (Indonesia, Japan, Australia, Italy, Croatia, Chile, even Jackson, Tennessee), Papertoy Monsters offers 50 fiendishly original die-cut designs that are ready to pop out, fold, and glue. The book interleaves card stock with paper stock for a unique craft package; the graphics are colorful and hip, combining the edginess of anime with the goofy fun of Uglydolls and other collectibles. Plus each character comes with its own back-story.

And the results are delicious: meet Pharaoh Thoth Amon, who once ruled Egypt but is now a mummy who practices dark magic in his sarcophagus. Or Zumbie the Zombie, who loves nothing more than a nice plate of brains and yams. NotSoScary, a little monster so useless at frightening people that he has to wear a scary mask. Yucky Chuck, the lunchbox creature born in the deepest depths of your school bag. Plus Zeke, the monster under your bed, Nom Nom, eater of cities, and Grumpy Gramps, the hairy grandpa monster with his very own moustache collection.

Brian Castleforte is an artist and graphic designer who has created cutting-edge graphics for Nike, Sony, Warner Brothers, MTV, and others. He is also the creator of nicepapertoys.com, the first and only papertoy social network. He lives in Los Angeles with his wife and two (real) puppies.