The Knife Thrower: and Other Stories (Vintage Contemporaries) (Paperback) 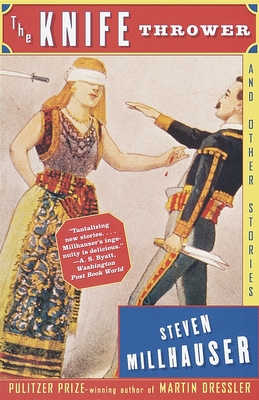 Included in this short story collection is "The Sisterhood of the Night", now a major motion picture. From the bestselling author of Martin Dressler, this volume explores the magnificent obsessions of the unfettered imagination, as well as the darker, subterranean currents that fuel them.

With the panache of an old-fashioned magician, Steven Millhauser conducts his readers from the dark corners beneath the sunlit world to a balloonist's tour of the heavens. He transforms department stores and amusement parks into alternate universes of infinite plentitude and menace. He unveils the secrets of a maker of automatons and a coven of teenage girls. And on every page of The Knife Thrower and Other Stories, Millhauser confirms his stature as a narrative enchanter in the tradition of Nabokov, Calvino, and Borges.

Steven Millhauser received the Pulitzer Prize for Martin Dressler. He is the author of Edwin Mullhouse, The Barnum Museum, and In the Penny Arcade, among other books. He lives with his wife and two children in Saratoga Springs, New York.

"An American writer of surpassing skill.... [Millhauser] renders the impossible itself with precision." —Chicago Tribune

"As Gothic as Poe and as imaginative as Fantasia, Millhauser's deceptive fables are funny and warm. But they're dark as dungeons, too.... He bewitches you." —Entertainment Weekly