Side by Side (Hardcover) 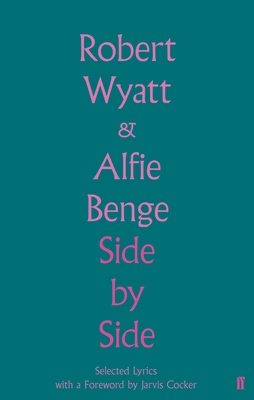 By Robert Wyatt
$19.95
Available from our distributor; usually Ships in 1-5 Days

Selected and arranged by the authors, and with a new introduction by Jarvis Cocker, Side by Side presents the lyrics of Robert Wyatt and Alfreda Benge for the first time in a beautiful cloth-bound Faber edition including previously unseen lyrics and artwork, annotations and poems. 'English music has produced some fascinating personalities, but few are as unusual as Robert Wyatt.' Brian Eno 'Robert Wyatt is one of the greats of English music' Geoff Travis, Rough Trade 'A highly idiosyncratic and intuitively melodic maverick' BBC Music

Starting out as a drummer for Soft Machine, sharing bills with Pink Floyd and Jimi Hendrix, Robert Wyatt blended Bohemian and jazz and brought it to the 60s rock scene. Focusing on singing and songwriting, he embarked on a unique solo career which earned him a loyal European following. Admired by his peers and with a career spanning five decades, he has collaborated with Bjork, John Cage, Brian Eno, Scritti Politti, David Gilmour and Hot Chip to name but a few. Alfreda Benge is a visual artist, songwriter and pioneering music manager, having managed Robert's career for fifty years. She is also married to Robert. She studied at Camberwell School of Art, London School of Printing and film at the Royal College of Art. Her film work includes Nicholas Roeg's Don't Look Now. She has designed all of Robert's album sleeves since 1974 and artwork for other artists including Ivor Cutler. She has, most importantly, written lyrics to some of Robert's most well-known songs.