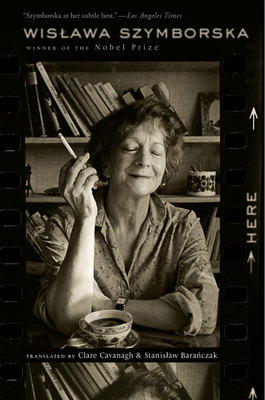 By Wislawa Szymborska, Clare Cavanagh (Translated by), Stanislaw Baranczak (Translated by)
$14.95
Available from our distributor; usually Ships in 1-5 Days

An exciting collection of poems by Wislawa Szymborska. When Here was published in Poland, reviewers marveled, “How is it that she keeps getting better?” These twenty-seven poems, as rendered by prize-winning translators Clare Cavanagh and Stanislaw Baranczak, are among her greatest ever. Whether writing about her teenage self, microscopic creatures, or the upsides to living on Earth, she remains a virtuoso of form, line, and thought.

From the title poem:

I can’t speak for elsewhere,
but here on Earth we’ve got a fair supply of everything.
Here we manufacture chairs and sorrows,
scissors, tenderness, transistors, violins, teacups, dams, and quips . . .

Like nowhere else, or almost nowhere,
you’re given your own torso here,
equipped with the accessories required
for adding your own children to the rest.
Not to mention arms, legs, and astonished head.

WISLAWA SZYMBORSKA (1923–2012) was born in Poland and worked as a poetry editor, translator, and columnist. She was awarded the Nobel Prize in Literature in 1996.

CLARE CAVANAGH, professor of Slavic and comparative literature at Northwestern, has received a PEN Translation Award for her work, with Stanislaw Baranczak, on Szymborska's poetry.

STANSILAW BARANCZAK, born in Poland in 1946, was a poet, literary critic, scholar, editor, translator and lecturer. He received numerous honors and awards, including a Guggenheim Felllowship, and translated many seminal works—including the work of William Shakespeare, E.E. Cummings, and Emily Dickinson—from English into Polish.

"No reader, not even poetry-phobes, should miss the bright revelations of Nobel laureate Szymborska. [...] Syzmborska is sharply ironic and lithely philosophical, pondering the phenomenal precision of dreams and the elusiveness of meaning. The neat, prancing lyrics collected in this slender, piercing book are delectable and profound." --Booklist