The Evil Hours: A Biography of Post-Traumatic Stress Disorder (Hardcover) 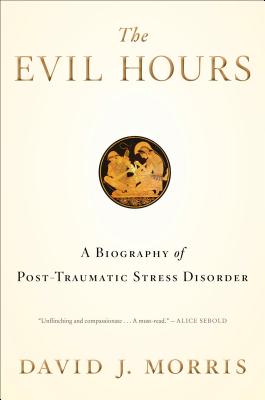 By David J. Morris
This item is currently unavailable and can not be ordered.
Unavailable

In the tradition of The Emperor of All Maladies and The Noonday Demon, a moving, eye-opening exploration of PTSD
Just as polio loomed over the 1950s, and AIDS stalked the 1980s and ’90s, posttraumatic stress disorder haunts us in the early years of the twenty-first century. Over a decade into the United States’ “global war on terror,” PTSD afflicts as many as 30 percent of the conflict’s veterans. But the disorder’s reach extends far beyond the armed forces. In total, some twenty-seven million Americans are believed to be PTSD survivors. Yet to many of us, the disorder remains shrouded in mystery, secrecy, and shame.

Now, David J. Morris — a war correspondent, former Marine, and PTSD sufferer himself — has written the essential account of this illness. Through interviews with individuals living with PTSD, forays into the scientific, literary, and cultural history of the illness, and memoir, Morris crafts a moving work that will speak not only to those with the condition and to their loved ones, but also to all of us struggling to make sense of an anxious and uncertain time.

DAVID J. MORRIS is a former Marine infantry officer and war correspondent. His work has appeared in The New Yorker, Slate, Daily Beast, and Best American Nonrequired Reading. In 2008, he was awarded a creative writing fellowship from the National Endowment for the Arts.

"THE EVIL HOURS is a provocative, exhaustively researched and deeply moving analysis of traumatic memory and how we make sense of it…an essential book not just for those who have experienced trauma, but for anyone who wants to understand post-9/11 America. Reading it will make you a better and more humane citizen." —New York Times Book Review

"The Evil Hours, by David Morris--at once a patient and fine writer--conveys the mysteries of trauma in a way that is unsurpassed in the literature...this is the most important book on the subject to come out in this century." —Times Literary Supplement

“An exploration of the enduring human cost of war...An eye-opening investigation of war's casualties.”—Kirkus

“Morris brings not just experience but insight to a topic of grave relevance...The takeaway is a durable resource for both those with PTSD and their loved ones.” —Donna Chavez, Booklist

“Even today, the ‘PTSD’ label is often misunderstood and misapplied, with the average reader seeing it as something that only affects veterans and rape victims (which is decidedly not the case). What a relief, then, to have Morris’ stunning writing and thorough research to make sense of it. As a former Marine, Morris writes vividly about life during and after war; and he also turns his eye towards the trauma that can arise from other categories including sexual assault and near-death experiences.” —Flavorwire

“The Evil Hours: A Biography of Post-Traumatic Stress Disorder is an engaging exploration of, and a timely resource on, the affliction first known in modern times as shell shock. David J. Morris, a former Marine who covered the Iraq war until he was involved in an explosion, uses his own experiences, literary accounts of war, and interviews with veterans, rape survivors and psychiatrists to weave a fascinating and well-researched narrative about psychological trauma and the American treatment of it.” —Chicago Tribune

“Morris has found himself in a position to help us think about PTSD with much more complexity than we’re accustomed to, and in so doing The Evil Hours takes an important and timely place in our culture.” —Minneapolis Star Tribune

“David Morris, a war journalist and former Marine officer, delivers a compassionate, approachable examination of post-traumatic stress in The Evil Hours…It is a book that already has cut a wide swath in the world of military veterans and others.” —The Oregonian

“A brave and honest memoir of living ‘in terror’s shadow,’ as well as a definitive account of the history, culture and science of the great affliction of our era… The Evil Hours is a gift of insight for survivors of combat stress and traumatic events of all kinds, as well as a call to action for the vast majority of Americans untouched by the brutality of more than 13 years at war.” —San Diego Union-Tribune

“David J. Morris invites us into his own heart of darkness in order to deliver an unflinching and compassionate study of Post-Traumatic Stress Disorder. This is far more than a biography of a psychological condition, or a memoir of one individual, it is also a cogent analysis of an ever increasing phenomenon that has changed the landscape of our culture. If one has any hope of coming to grips with what shapes America every day, The Evil Hours is a must read.” —Alice Sebold, author of The Lovely Bones

“’Trauma destroys the normal narrative of life,’ Morris explains in this impassioned, well-researched, and beautifully written biography of an illness that we’ve only recently realized is an illness. Though he ‘hates the idea of turning writing into therapy,’ reading his book has helped this fellow sufferer. The Evil Hours is a much needed narrative.” —Ismet Prcic, author of Shards

“Masterful and moving, David Morris’s investigation of this troubling psychiatric disorder asks all the important questions. This book honors suffering while also making room for hope.”  —Emily Bazelon, author of Sticks and Stones

“A beautiful book, the non-fiction brother of Phil Klay's Redeployment. Read it.” —Tom Ricks, author of Fiasco and The Generals

“This book has the hypnotic appeal of authenticity. David J. Morris is a writer, warrior, and sufferer, his words carry an inescapable truth. His story glides through the drifting incredulity of trauma, terrible memories, and the struggling science of comprehension. There is something addictive in his way of drawing you in. The Evil Hours is fascinating uncovering of the mind, unnervingly profound.” —Joe Simpson, author of Touching the Void