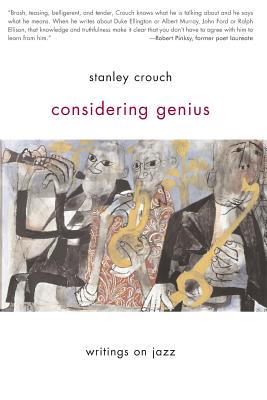 By Stanley Crouch
This item is currently unavailable and can not be ordered.
Usually Ships in 1-5 Days

Stanley Crouch-MacArthur “Genius” Award recipient, co-founder of Jazz at Lincoln Center, National Book Award nominee, and perennial bull in the china shop of black intelligentsia-has been writing about jazz and jazz artists for more than thirty years. His reputation for controversy is exceeded only by a universal respect for his intellect and passion. As Gary Giddons notes: “Stanley may be the only jazz writer out there with the kind of rhinoceros hide necessary to provoke and outrage and then withstand the fulminations that come back.” In Considering Genius, Crouch collects some of his best loved, most influential, and most controversial pieces (published in Jazz Times, The New Yorker, the Village Voice, and elsewhere), together with two new essays. The pieces range from the introspective “Jazz Criticism and Its Effect on the Art Form” to a rollicking debate with Amiri Baraka, to vivid, intimate portraits of the legendary performers Crouch has known.

Stanley Crouch is a columnist, novelist, essayist, and television commentator. He has served since 1987 as an artistic consultant at Lincoln Center and is a co-founder of the department known as Jazz at Lincoln Center. He is the author of Notes of a Hanging Judge and The Artificial White Man, among other titles. He lives in New York City.