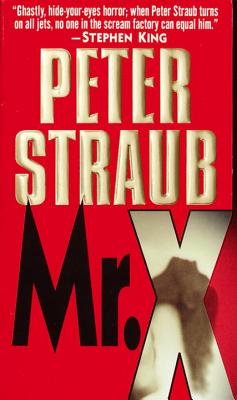 Every year on his birthday, Ned Dunstan is cursed with visions of horror committed by a savage figure he calls "Mr. X." This year, Ned's visions will become flesh and blood.

A dreadful premonition brings Ned home to find his mother on her deathbed. She reveals the never-before-disclosed name of his father and warns him of grave danger. Driven by a desperate sense of need, Ned explores his dark past and the astonishing legacy of his kin. Accused of violent crimes he has not committed and pursued by a shadowy twin, Ned enters a hidden world of ominous mysteries, where he must confront his deepest nightmares. . . .

Peter Straub was born in Milwaukee, Wisconsin, and is the author of fourteen novels. He has won the British Fantasy Award, the Bram Stoker Award, the International Horror Guild Award, and two World Fantasy awards and was elected Grand Master at the 1998 World Horror Convention. His books have been translated into more than twenty foreign languages. He lives in New York City.

"Ghastly, hide-your-eyes horror; when Peter Straub turns on all jets, no one in the scream factory can equal him."
--STEPHEN KING

"STRAUB IS TERRIFYINGLY ACCOMPLISHED IN THE ART OF HORROR."
--Entertainment Weekly