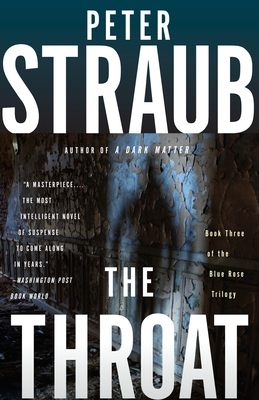 This is book number 3 in the Blue Rose Trilogy series.

The Throat.  Tim Underhill, now an acclaimed novelist, travels back to his hometown of Millhaven, Illinois after he gets a call from John Ransom, an old army buddy.  Ransom believes there’s a copycat killer on the loose, mimicking the Blue Rose murders from decades earlier—he thinks his wife could be a potential victim.  Underhill seeks out his old friend Tom Pasmore, an aging hermit who has attained minor celebrity as an expert sleuth, to help him investigate.  They quickly discover that Millhaven is a town plagued by horrifying secrets and there is a twisted killer on the loose who is far more dangerous than they ever imagined.  Expertly tying together the events of Koko and Mystery, The Throat proves Peter Straub to be the master of the suspense novel.

Peter Straub is the New York Times bestselling author of more than a dozen novels, most recently A Dark Matter.  He has won the Bram Stoker Award for his novels, Lost Boy Lost Girl and In the Night Room, as well as for his recent collection, 5 Stories.  Straub was the editor of the two-volume Library of American anthology The American Fantastic Tale.  He lives in New York City.

“A masterpiece. . . . The most intelligent novel of suspense to come along in years.” —Washington Post Book World

“Magnificent. . . . Intensely riveting. . . . A haunting tale of murder, obsession, and the malevolent horror that can inhabit those dark forbidding places in us all.” —Milwaukee Journal Sentinel

“An intense thriller. . . . Fans of Straub’s Koko will be pleased to know that Tim Underhill is back.” —USA Today

“An excellent psychological novel. . . . Straub well understands the dark recesses of the psyche where the personal demons dwell. . . . We may want to turn away . . . but we cannot because the horror mesmerizes us.” —Pittsburgh Post-Gazette

“Suspenseful and compelling. . . . Mesmerizing. . . . An accelerated roller-coaster read that is totally engrossing. . . . Just when the reader thinks he has the cases figured out, Straub manipulates the plot to expose yet more twists.” —Chattanooga Times Free Press

“The characters are outstanding. . . . They are the story, enshrouded by a nightmare that never lifts. Peter Straub takes bold risks and he succeeds.” —San Jose Mercury News