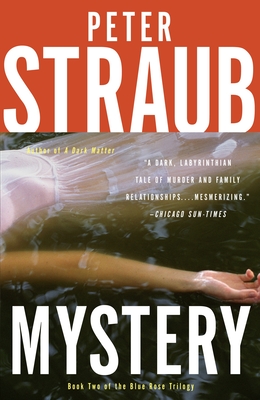 This is book number 2 in the Blue Rose Trilogy series.

MYSTERY.  Tom Pasmore, ten years old, survives a near fatal accident.  During his long recovery, he becomes obsessed with an unsolved murder and finds he has clues to solving it that he shouldn’t.  Lamont von Heilitz has spent his life solving mysteries, until he wanted to know nothing more of the terror of life and the horror of death.  When a new murder disrupts their world of wealth, power, and pleasure, the two must form an unlikely partnership to confront demons from the past and the dark secrets that still haunt the present.

Peter Straub is the New York Times bestselling author of more than a dozen novels, most recently A Dark Matter. He has twice been awarded the Bram Stoker Award, for his novels Lost Boy Lost Girl and In the Night Room. He lives in New York City.

“The near perfect mystery. . . . Has everything a classic whodunit should. . . . Full of intricate, engrossing, flesh-and-blood suspects and heroes. . . . Unexpected curves and potholes. . . . The title says it all.” —Milwaukee Sentinel

“The characters are outstanding. . . . They are the story, enshrouded by a nightmare that never lifts. Peter Straub takes bold risks and he succeeds.” —San Jose Mercury News