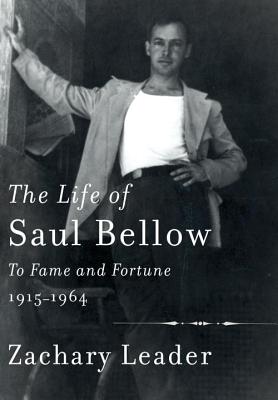 For much of his adult life, Saul Bellow was the most acclaimed novelist in America, the winner of, among other awards, the Nobel Prize in Literature, three National Book Awards, and the Pulitzer Prize. The Life of Saul Bellow, by the literary scholar and biographer Zachary Leader, marks the centenary of Bellow’s birth as well as the tenth anniversary of his death. It draws on unprecedented access to Bellow’s papers, including much previously restricted material, as well as interviews with more than 150 of the novelist’s relatives, close friends, colleagues, and lovers, a number of whom have never spoken to researchers before. Through detailed exploration of Bellow’s writings, and the private history that informed them, Leader chronicles a singular life in letters, offering original and nuanced accounts not only of the novelist’s development and rise to eminence, but of his many identities—as writer, polemicist, husband, father, Chicagoan, Jew, American.

The biography will be published in two volumes. The first volume, To Fame and Fortune: 1915–1964, traces Bellow’s Russian roots; his birth and early childhood in Quebec; his years in Chicago; his travels in Mexico, Europe, and Israel; the first three of his five marriages; and the novels from Dangling Man and The Adventures of Augie March to the best-selling Herzog. New light is shed on Bellow’s fellow writers, including Ralph Ellison, John Berryman, Lionel Trilling, and Philip Roth, and on his turbulent and influential life away from the desk, which was as full of incident as his fiction. Bellow emerges as a compelling character, and Leader’s powerful accounts of his writings, published and unpublished, forward the case for his being, as the critic James Wood puts it, “the greatest of American prose stylists in the twentieth century.”

ZACHARY LEADER is professor of English literature at the University of Roehampton in London. An American citizen, he has lived in Britain for more than forty years. In addition to teaching at Roehampton, he has held visiting professorships at Caltech and the University of Chicago. He was educated at Northwestern University; Trinity College, Cambridge; and Harvard University, and is the author of Reading Blake’s Songs, Writer’s Block, Revision and Romantic Authorship, and The Life of Kingsley Amis, a finalist for the 2008 Pulitzer Prize in Biography. He has edited Romantic Period Writings, 1798–1832: An Anthology (with Ian Haywood); The Letters of Kingsley Amis; On Modern British Fiction; Percy Bysshe Shelley: The Major Works (with Michael O’Neill); and The Movement Reconsidered: Essays on Larkin, Amis, Gunn, Davie, and Their Contemporaries. He is a fellow of the Royal Society of Literature.

“Since Saul Bellow--along with William Faulkner--constitutes the sturdy backbone of 20th century American literature, a biography as lavishly detailed and craftily organized as Mr. Leader's is a necessary addition to the library of major biographies of our strongest writers. Despite Bellow's every effort to find order and serenity in which to do his work, his life, as it is meticulously presented here, was no less wild and original than his novels , a turbulence of crises that might have killed him had they not been magically transfigured  by a prose style as rich and roiling as Melville's into one of the liveliest, brainiest collections of vivid American fiction that is ours to treasure.”
—Philip Roth

“A dazzling piece of work—a tremendous achievement—it draws the reader in wonderfully well, with its almost manic attention to biographical detail, and its inspired interweaving of Bellow's autobiography with his fiction. It's shrewd and scholarly throughout; but also lavish, entertaining and frequently mischievous. Young Bellow himself comes steadily surging through, getting bigger and bigger: clever, ambitious, philandering, mordant, magnificent, dominating and always furiously typing, typing, typing. In a word, this Volume One has all the makings of an American epic.  I enjoyed it immensely.”
—Richard Holmes

“Zachary Leader has written a multi-layered book about a colossal American literary life. His research is prodigious, his curiosity about Saul Bellow’s epic career limitless, and he reinvents biography as a four-dimensional narrative of time, space, perspective, and genre. Leader sets forth  Bellow’s life history through his interviews and letters as well as those  of his huge extended family, his wives, mistresses, children, friends,  enemies,  neighbors,  colleagues, critics, rivals, teachers, students, agents, editors, and publishers, and through analyses of  Bellow’s  books and stories about  them, and  their  books and stories about him. On a grand scale, as enthralling as it is masterful, The Life of Saul Bellow is one of the great biographies of our time.”
—Elaine Showalter

“Richly detailed, Zachary Leader's admiring but clear-eyed chronicle of Saul Bellow's youth, talent, and his struggle for recognition is nuanced, impassioned, and capacious; from him we meet Bellow as if for the first time, as friend, lover, father, husband, American, and Jew-- and of course as the writer who energetically resisted despair and cynicism with his profound commitment to literature and to life.  An essential book-- more than a biography, it's the story of American letters in the twentieth century.”
—Brenda Wineapple

“Zachary Leader has read everything, interviewed everyone, and woven it all together into a biography of Saul Bellow on a grand scale. Staggering in its research, rich with insight into the relationships between his family origins, the lives he pursued, the people he knew, and the books he wrote, this account lays bare the alchemy of Bellow’s imagination and the sources of his literary achievement in profuse and arresting detail.”
— Morris Dickstein

“This will stand as the definitive account of the making of Saul Bellow, an absorbing story of how a determined young writer emerged as one of the twentieth-century’s most celebrated novelists."
—James Shapiro

“It is, however, certain that I will not be alone in the expectation that The Life of Saul Bellow will prove definitive. Leader is respectful but unintimidated, balanced but never anodyne, and his literary criticism, like his prose, is unfailingly stylish and acute. The book is very learned,”
—Martin Amis, Vanity Fair

“Zachary Leader, the latest Bellow biographer, has found plenty… Leader is statesmanlike, fair-minded…He is particularly felicitous in his descriptions of Bellow’s parents and their struggles”
—Judith Shulevitz, The Atlantic

“Unsurpassable. It is a valuable resource, and the prose is clear and poised.”
—New York Review of Books

“Will surely become the standard biography of Bellow for years to come.”
—Washington Post

“The most purely delicious literary biography that I’ve come across. Leader’s calm, gradual, but serenely excited prose vibrates with the joy of his thought coalescing with his subject.”
—The New Yorker

“Leader does full justice to both life and oeuvre in this chronicle of Bellow’s struggle. . . . Leader’s biography has the vital virtue of ringing true. . . . Leader’s life of Saul Bellow is not merely head and shoulders above its predecessors, but given the depth of his research and judgment and its broad scope, it is hard to imagine it being bettered anytime soon.”
—San Francisco Chronicle

“Uncommonly good. . . . [Leader] has not only made himself familiar with all of Bellow’s facts. He has also made the vigilant reader welcome to them.”
—Milwaukee Journal-Sentinel

“Leader’s research here…is astonishing. It is a banquet, a profoundly serious and scholarly examination of an important American writer.”
—Cleveland Plain Dealer

“Leader’s Life of Saul Bellow is likely to remain the definitive biography. . . . Leader has our gratitude.”
—Commentary

“Will now stand as the definitive Bellow biography.”
—Kirkus (Starred)

“An impressive achievement, this biography gives noble due to one of the 20th century’s most significant writers.”
—Publishers Weekly (PW Pick)