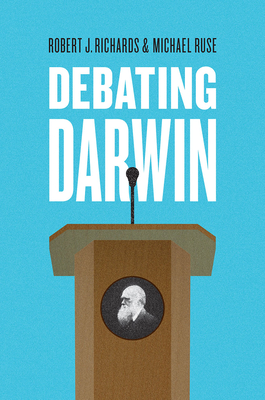 Charles Darwin is easily the most famous scientist of the modern age, and his theory of evolution is constantly referenced in many contexts by scientists and nonscientists alike. And yet, despite how frequently his ideas are evoked, there remains a surprising amount we don’t know about the father of modern evolutionary thinking, his intellectual roots, and the science he produced. Debating Darwin seeks to change that, bringing together two leading Darwin scholars—Robert J. Richards and Michael Ruse—to engage in a spirited and insightful dialogue, offering their interpretations of Darwin and their critiques of each other’s thinking.
Examining key disagreements about Darwin that continue to confound even committed Darwinists, Richards and Ruse offer divergent views on the origins and nature of Darwin and his ideas. Ruse argues that Darwin was quintessentially British and that the roots of his thought can be traced back to the eighteenth century, particularly to the Industrial Revolution and thinkers such as Adam Smith and Thomas Robert Malthus. Ruse argues that when these influences are appreciated, we can see how Darwin’s work in biology is an extension of their theories. In contrast, Richards presents Darwin as a more cosmopolitan, self-educated man, influenced as much by French and particularly German thinkers.  Above all, argues Richards, it was Alexander von Humboldt who both inspired Darwin and gave him the conceptual tools that he needed to find and formulate his evolutionary hypotheses. Together, the authors show how the reverberations of the contrasting views on Darwin’s influences can be felt in theories about the nature of natural selection, the role of metaphor in science, and the place of God in Darwin’s thought.
Revealing how much there still is to investigate and interrogate about Darwin’s ideas, Debating Darwin contributes to our understanding of evolution itself. The book concludes with a jointly authored chapter that brings this debate into the present, focusing on human evolution, consciousness, religion, and morality. This will be powerful, essential reading for anyone seeking a comprehensive understanding of modern-day evolutionary science and philosophy.

“This work is devoted to an exchange between two friendly adversaries, Richards and Ruse. Both authors have previously debated Darwinian evolution, but this book allows Richards and Ruse to expand their ideas and rebut each other’s contrasting views. Ruse explains that Darwin had a “mechanistic” view of the world and was the product of 18th-century Britain, including the Scottish Enlightenment. Richards indicates Darwin was more ‘cosmopolitan,’ was influenced by other thinkers (particularly Alexander von Humboldt), and was deeply impacted by German romanticism. Thus, Darwin’s evolutionary model was ‘teleological’—Darwin accepted final cause. Ruse strongly differs with Richard’s analysis—most biologists and historians would reject it as well. The book includes an epilogue summarizing the important developments in evolutionary biology that took place after Darwin. This book will have special appeal to historians and philosophers of biology. Recommended.”
— Choice

“[T]his book gives an airing to an important debate that has simmered for years and is now displayed so that a wider audience can appreciate its significance. Read it, and make your own mind up.”
— British Journal for the History of Science

"In most volumes with more than a single author, the contributors complement each other, addressing a common subject matter from a shared point of view. Robert J. Richards and Michael Ruse's Debating Darwin is unusual in the sense that its two authors disagree, profoundly so, about their joint topic of interest--Charles Darwin. . . . This format succeeds admirably well. Both Richards and Ruse are top-bracket historians and philosophers of science, and both have long been at the cutting edge of Darwin scholarship. While reading one author's persuasive account, one can't wait to read what the other could possibly have up his scholarly sleeve to outclass his opponent; and reading on, one equally eagerly anticipates the respective responses. . . . I strongly recommend this book to anyone who teaches evolutionary biology, as either a history course or a science course. We have been given an accessible, quality read in the form of an exciting and skilled joust between two knights in the service of today’s king of evolution theory."
— American Historical Review

“This engaging dialogue between Richards and Ruse is both an excellent, accessible summary of two distinguished scholarly careers of research on Darwin and evolution and a source of fresh insights.  Although the authors situate Darwin’s life and thought in two very different cultural contexts—German romanticism (Richards) and English gentlemanly society (Ruse)—the reader is struck more by how compatible and instructive these accounts are for understanding Darwin’s thought as a rich and fertile source of subsequent inspiration and debate.  A highly recommended introduction to the topic for students and general readers and an entertaining read for veterans of the Darwin wars.”
— David Sepkoski, author of Rereading the Fossil Record: The Growth of Paleobiology as an Evolutionary Discipline

“Debating Darwin offers readers a ringside seat at a friendly but no-holds-barred fight about Charles Darwin’s place in history.  Was the British Enlightenment the making of Darwin, as Ruse contends?  Or was Darwin a child of the Romantic science of Goethe and his followers, as Richards suggests?  Watching these two outstanding scholar-teachers argue it out is an education in history, science, and the pleasures of serious disagreement.”

— Gregory Radick, author of The Simian Tongue: The Long Debate about Animal Language

“Charles Darwin’s ideas were controversial from the outset, so much so that Darwin’s friend and supporter Thomas Henry Huxley said he sharpened up his claws and beak in order to defend them. Here in this volume the debate continues as two world-renowned historians explore what Darwin’s proposals meant in his own day and to us now. The issue at stake is how best to understand Darwin as a thinker—was he influenced primarily by his personal social context, the industrializing entrepreneurial world of Britain in the Victorian era, or was he more in touch with the great intellectual currents flourishing in continental Europe?  How did these questions influence his religious sensibilities and those of his readers? Back and forth, the ripostes sparkle with intellectual energy. Through Ruse’s and Richards’ eyes, we can see Darwin afresh, as the enthralling historical figure who not only transformed biology but also our deepest sense of who we are.”

— Janet Browne, author of Charles Darwin: The Power of Place

"The authors’ debate is learned, witty, engaging, and even passionate. Students and Darwin scholars alike will be able to read this volume with interest  and  enjoyment  and  be inspired  to go back to Darwin’s own writings, especially to Darwin’s early notebooks, the Origin of Species, and the Descent of Man in the continued e?ort to comprehend Darwin in his historical context."
— Journal of the History of Biology

"I learned a great deal reading the complicated and intellectually demanding Debating Darwin, over and over, more times than I can count during the eight months the book has been in my hands. I recommend it to every serious evolutionary biologist and to those armchair evolutionists who remain fascinated with Darwin’s century, and to teachers of history and philosophy."
— Quarterly Review of Biology