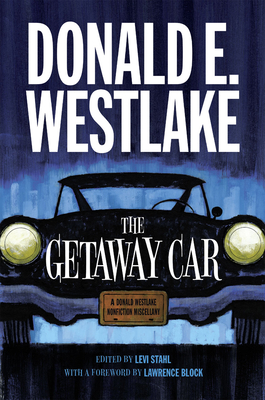 By Donald E. Westlake, Levi Stahl (Editor), Levi Stahl (Introduction by), Lawrence Block (Foreword by)
This item is currently unavailable and can not be ordered.
Unavailable

Over the course of a fifty-year career, Donald E. Westlake published nearly one hundred books, including not one but two long-running series, starring the hard-hitting Parker and the hapless John Dortmunder. In the six years since his death, Westlake’s reputation has only grown, with fans continuing to marvel at his tightly constructed plots, no-nonsense prose, and keen, even unsettling, insights into human behavior.

With The Getaway Car, we get our first glimpse of another side of Westlake the writer: what he did when he wasn’t busy making stuff up. And it’s fascinating. Setting previously published pieces, many little seen, alongside never-before-published material found in Westlake’s working files, the book offers a clear picture of the man behind the books—including his thoughts on his own work and that of his peers, mentors, and influences. The book opens with revealing (and funny) fragments from an unpublished autobiography, then goes on to offer an extended history of private eye fiction, a conversation among Westlake’s numerous pen names, letters to friends and colleagues, interviews, appreciations of fellow writers, and much, much more. There’s even a recipe for Sloth à la Dortmunder. Really.

Rounded out with a foreword by Westlake’s longtime friend Lawrence Block, The Getaway Car is a fitting capstone to a storied career and a wonderful opportunity to revel anew in the voice and sensibility of a master craftsman.

Donald E. Westlake (1933–2008) was a prolific author of crime fiction. In 1993, the Mystery Writers of America bestowed the society’s highest honor on Westlake, naming him a Grand Master. Levi Stahl is the promotions director of the University of Chicago Press.

“This is a book for everyone, anyone who likes mystery novels or good writing or wit and passion and intelligence, regardless of their source.”
— New York Times

“The great Donald E. Westlake, author of some of the best puzzles of the 20th century, turns out to have been a terrific essayist and correspondent, too. Reading this collection of nonfiction is like becoming friends with a mystery novelist.”
— Printer's Row

“This book doesn’t disappoint. . . . Westlake was a hugely entertaining and witty writer. Whether he is writing a letter to his editor or about the history of his genre, he remains true to his definition of what makes a great writer: ‘passion, plus craft.’”
— P.D. Smith

“Almost as much as he enjoyed writing crime novels, Westlake liked to write comments on his own work and on that of his contemporaries and predecessors in the genre. His list of written product includes countless essays, book introductions and prefaces, lists, letters and one memorial (to John D. MacDonald). It’s from this treasure trove of material that an eager beaver academic named Levi Stahl at the University of Chicago has put together the valuable collection he titles The Getaway Car.”
— Toronto Star

“A kind of posthumous autobiography, a selection of his occasional nonfiction that gives us a portrait of an interesting mind, a high-spirited friend, a shrewd critic, and a craftsman reflecting on his trade—and of a kind of writing life that may no longer be available. It should appeal not only to fans of Westlake but to anyone who takes pleasure in seeing a job done well or reading a well-turned sentence.”
— David Guaspari