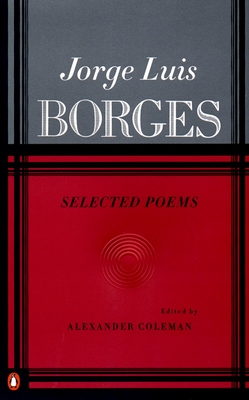 Though universally acclaimed for his dazzling fictions, Jorge Luis Borges always considered himself first and foremost a poet. This new bilingual selection brings together some two hundred poems--the largest collection of Borges' poetry ever assembled in English, including scores of poems never previously translated. Edited by Alexander Coleman, the selection draws from a lifetime's work--from Borges' first published volume of verse, Fervor de Buenos Aires (1923), to his final work, Los Conjurados, published just a year before his death in 1986. Throughout this unique collection the brilliance of the Spanish originals is matched by luminous English versions by a remarkable cast of translators, including Robert Fitzgerald, Stephen Kessler, W. S. Merwin, Alastair Reid, Mark Strand, Charles Tomlinson, and John Updike.

Jorges Luis Borges was born in Buenos Aires in 1899 and educated in Europe. One of the most widely acclaimed writers of our time, he published many collections of poems, essays and short stories, before his death in Geneva in June 1986. In 1961 Borges shared the International Publishers' Prize with Samuel Beckett. The Ingram Merrill Foundation granted him its Annual Literary Award in 1966 for his "outstanding contribution to literature." In 1971 Columbia University awarded him the first of many degrees of Doctor of Letters, honoris causa that he was to receive from the English-speaking world. In 1971 he received the fifth biennial Jerusalem Prize and in 1973 was given the Alfonso Reyes Prize, one of Mexico's most prestigious cultural awards. In 1980 he shared the Cervantes Prize (the Spanish world's highest literary accolade) with Gerardo Diego. Borges was Director of the Argentine National Library from 1955 until 1973. In a tribute to Borges, Mario Vargas Llosa wrote: "His is a world of clear, pure, and at the same time unusual ideas...expressed in words of great directness and restraint. [He] was a superb storyteller. One reads most of Borges' tales with the hypnotic interest usually reserved for reading detective fiction..."