The Sun in Your Eyes: A Novel (Hardcover) 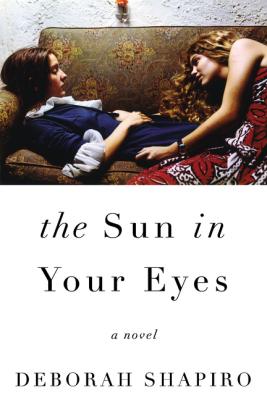 By Deborah Shapiro
This item is currently unavailable and can not be ordered.
Unavailable

The Wall Street Journal calls The Sun in Your Eyes one of "the season's most exciting fiction reads."

One of Vulture's "7 Books You Need to Read this July"

Harper's Bazaar picked it as one of "Spring's Hottest Breakout Novels."

A witty and winning new voice comes alive in this infectious road trip adventure with a rock-and-roll twist.  Shapiro’s debut blends the emotional nuance of Elena Ferrante with the potent nostalgia of High Fidelity, in a story of two women—one rich and alluring, the other just another planet in her dazzling orbit—and their fervid and troubled friendship.

From the distance of a few yards, there might be nothing distinctive about Lee Parrish, nothing you could put your finger on, and yet, if she were to walk into a room, you would notice her. And if you were with her, I’d always thought, you could walk into any room.

When a one-night stand fractures Lee and Andy’s intimate rapport, Lee turns to Viv, inviting her into her glamorous fly-by-night world: an intoxicating mix of Hollywood directors, ambitious artists, and first-class everything. It is the beginning of a friendship that will inexorably shape both women as they embark on the rocky road to adulthood.

More than a decade later, Viv is married to Andy and hasn’t heard from Lee in three years. Suddenly, Lee reappears, begging for a favor: she wants Viv to help her find the lost album Jesse was recording before his death.  Holding on to a life-altering secret and ambivalent about her path, Viv allows herself to be pulled into Lee’s world once again.  But the chance to rekindle the magic and mystery of their youth might come with a painful lesson: While the sun dazzles us with its warmth and brilliance, it may also blind us from seeing what we really need.

What begins as a familiar story of two girls falling under each other’s spell evolves into an evocative, and at times irrepressibly funny, study of female friendship in all its glorious intensity and heartbreaking complexity.

Deborah Shapiro was born and raised outside of Boston, Massachusetts. A graduate of Brown University, she spent several years in New York working at magazines, including New York and ELLE, and her work has been published in Open City, Washington Square Review, and the Los Angeles Review of Books, among other places. She lives with her husband and son in Chicago. The Sun in Your Eyes is her first novel.

“Shapiro adroitly conveys the women’s complicated intimacy...Viv and Lee were never lovers, but they did, for a time, complete each other. What happened to that closeness--and how to move beyond it--is as much a mystery as Jesse Parrish’s long-lost tapes.”
— New York Times Book Review

“A novel that shines darkly, like literary glitter...Shapiro’s prose is elegant, effortless, but it’s her characters that will keep you up late into the night, hoping you can save them, but knowing you can’t.”
— Stephanie Danler, New York Times bestselling author of Sweetbitter

“Shapiro’s writing is light and lovely, evoking the sun of her title...The scene, of the sort once presided over by Ellen Willis, Lester Bangs and Joan Didion...is an evocative setting, but the main action remains in the space between Viv and Lee, in their closeness and distance.”
— Washington Post

“Put down everything and pick up The Sun in Your Eyes! It’s beguiling, funny, bighearted and true-the perfect summer book. You’re welcome.”
— Ann Hood, bestselling author of The Knitting Circle

“Realistically complex, defined by moments of betrayal, loyalty, and closeness...This novel unravels the competing nature of affection and jealousy in friendship, illuminating the stickier facets of emotional dependency between friends.”
— Kirkus Reviews

“Ferociously smart and ferociously funny. [As] if Evelyn Waugh, Eve Babitz, Elaine Dundy and Elaine Benes got together to tell a story about lost legends and lost friendships.”
— Carlene Bauer, author of Frances and Bernard and Not That Kind of Girl

“The nuances and subtleties of female freindship are highlighed in Shapiro’s candid and humorous story. Viv and Lee are distinctive, each shining in their individuality. Through a well-crafted plot, Shapiro expresses clearly Viv and Lee’s contrasting and conflicting thoughts, along with the indelible marks they leave on each other.”
— RT Book Reviews