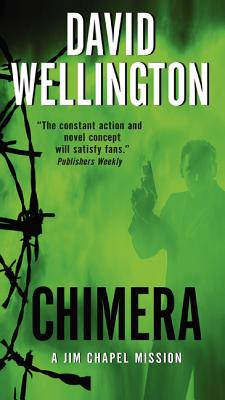 By David Wellington
This item is currently unavailable and can not be ordered.
Unavailable

Afghanistan veteran Jim Chapel has been enlisted in a new war, this time in his own backyard . . .

A band of fugitives has escaped from a secret military facility. Each has a target—an innocent civilian—and they will not stop until that target has been eliminated. Wounded Special Forces veteran Jim Chapel has been stuck behind a desk, but now medical technology has finally caught up with Chapel's ambitions, and combined with his unstoppable determination he'll get back to where he thrives: in the thick of the action.

Chapel must hunt down the escapees—all extremely deadly, genetically modified killers—and unravel the mystery behind their existence. Aided by a mysterious woman named Angel and a courageous, beautiful veterinarian, Chapel begins a cross-country hunt to stop the murders. But are the killers really rogues, or are they part of a sinister conspiracy that reaches to the highest levels?

David Wellington lives and works in Brooklyn, New York. He is the author of the Monster Island trilogy of zombie novels; the Thirteen Bullets vampire series; the epic post-apocalyptic novel Positive; and the Jim Chapel missions, including the digital shorts “Minotaur” and “Myrmidon,” and the novels Chimera and The Hydra Protocol.

“Sure to score with those who like a little touch of science fiction with their action thrillers.”
— Kirkus Reviews

“The constant action and novel concept will satisfy fans of the genre.”
— Publishers Weekly

“Highly recommended because of its diverse and credible characters, as well as its confident, skillful structure and prose throughout. All hallmarks of one of the finest authors working in today’s horror genre.”
— Bookgasm

“This is a good and entertaining read, first page to last.”
— Examiner.com

“It maintains the same breakneck pace of 13 Bullets throughout.”
— Unshelved